Please ensure Javascript is enabled for purposes of website accessibility
Log In Help Join The Motley Fool
Free Article Join Over 1 Million Premium Members And Get More In-Depth Stock Guidance and Research
By Ilan Moscovitz and John Reeves - Apr 3, 2013 at 11:47AM

The best reader responses to our April Fool’s Day Joke.

That was just one of the nearly 1,700 emails we received in response to our "Hugest Bubble in History Set to Explode" special alert.

By now, most of you probably know that we weren't really tipped off to a soon-to-explode bubble of historic proportions. There was no anonymous Swiss bubble expert feeding us information -- it was all part of this year's April Fool's Day joke, which took to task Wall Street, hurried speculators, and breathless pundits.

In addition to offering our own Market Goggles™ to help you "see" through the market noise and a ShadowFear Index™ that identified "hidden" levels of market fear, we asked readers to submit their own favorite bubble plays.

The most popular were big-name blue chips: Johnson & Johnson, Hormel, Berkshire Hathaway, and Costco. A lot of readers also thought tech stocks like Apple and 3D Systems would be good picks for a bubble.

Commodity buffs liked natural gas exporter Cheniere Energy and Silver Wheaton. The VIX market volatility index was also a popular pick, even though we claimed in update 7 that the VIX IS CONTROLLED BY WALL STREET.

Here were some fairly typical responses:

I want two (2) pairs [of Market Goggles™].
I want green and blue
One stock I am interested in to play the bubble is Johnson & Johnson (JNJ).

Is this a joke? JNJ

Please send me the "MegaBubble: What's Hot and What's Not" special free report.

Wondering if you still have the market Google for free.

Some readers got really creative and suggested alternative investments for playing the bubble. Here are 10 of our favorite responses:

1. As an asset class, ant farms have held their value in previous market downturns. The only downside that I can foresee is that it is a niche market within the collectibles class that is very thinly traded, and is only traded on the Puerto Maldonaldo exchange.

2. With the end of Hostess, Twinkies are already becoming a rare commodity.... The already low supply and intense demand that will come after the collapse will create a perfect storm for Twinkie prices.

4. None of the metals you mentioned above. More likely silver. Secondarily maybe Boron.

5. I would like to request one pair of 3-D glasses, Rose colored lenses; my stock to play the bubble is Facebook.

6. Cannot reveal source as it is a close and trusted friend, seems [large European bank] is looking more and more "troubling."

[At that point, our reader received our automatic email response: "Dear Fool, Thanks for your note! The Motley Fool's mission is "to educate, amuse, and enrich," and every April 1, we like to focus on amusement in particular...." The reader then replied]

Oh, then "nevermind" the bit on [large European bank]
Onwards

7. Hardened Structures, LLC and Utah Shelter Systems. Should the dreaded triple top scenario play out, global markets will be worthless so we should invest exclusively in private companies. These provide high-quality services for people preparing for chem/nuke/bio/zombie attacks.

8. I am investing in Krispy Kreme, the donuts, not the stock. Lots and lots of donuts. I will freeze them.

9. Canada's supply of their copper pennies (actually copper-plated) has been decreasing -- they stopped minting them on May 4, 2012.... I suggest TMF utilizes its membership and begins a "buy-in" of pool of Canadian Pennies. At $1,000, each Fool can be promised to "own" about 50,000 Canadian pennies (actual number will of course depend on how many pennies we can withdraw from Canadian banks, grocery stores, and Tim Hortons donut shops).

Lots of readers got the joke:

My sides are still splitting!
Love It

Subject: Goggle Me Softly
I must have a pair of these sporty goggles so I can watch my investments melt away in style.

"this is soooo un-Fool like". About a paragraph in recalled the date. I cannot believe the lengths to which you will go. Good one.

Wait, is that a prominently featured bottle of Macallan?
Aw yeah.

A vice president of a major European bank wanted to know if we had any clues which three European banks were set to collapse. (He did not recognize the dateline.)

Someone from a top U.S. bank wanted to get a copy of our "MegaBubble: What's Hot and What's Not special report." We also heard from a director of a major investment advisory company who wanted live updates of our ShadowFear Index™. 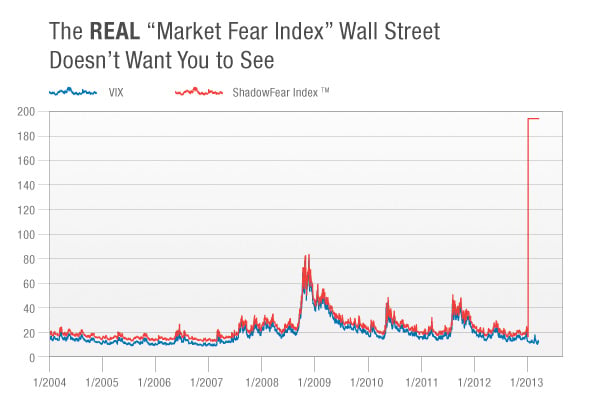 Of course, we also heard from some readers -- like this expert -- who were disappointed by our careless freneticism:

Your ShadowFear score is not credible because of the virtually infinite discontinuity in the curve. How can the ShadowFear score so closely track the VIX, and yet when it comes to 2013, it has a hugely discontinuous jump/drop...?

As an ex-engineer, such discontinuous curves lead me to the only conclusion: something is wrong in the way that the curve was drawn at that point.

Here's a great email chastising us for our Red Bull-and-panic-fueled grammatical mistakes:

Before you even publish your crap, first learn to write proper English. There is no word 'Hugest' in the English language.

Please go back to school and learn some English grammar.

This wasn't the only reader disappointed by our emergency response team's casual stupidity:

Subject: your recent END OF THE WORLD EXPLOSION email
WHAT THE [EXPLETIVE]? You guys gotta get off the crack. I don't know what to make of this idiotic email, other than a freak schizoid clown suffering from a drug and alcohol-induced break with reality.... [After receiving our automatic email response, the reader added]

Thanks to everyone for celebrating April Fool's Day with us. If you haven't yet, go and read our reveal article, detailing the "lessons" contained inside this year's joke. And until next year, Fool On!