While many deride the practice of reading the tea leaves of the market, it has its merits.

While a large portion of the investing world has dismissed technical analysis, a new study shows that the method may actually have some merit. Will those who think it silly to invest based on lines drawn on charts go down in history as 21st-century flat-worlders?

Reviewing the charts
With all its funny lingo, charts with more annotations than the Bible, and headache-inducing context, technical analysis is an easy target for critics. The Motley Fool itself poked fun at such investing theory in its latest April Fools' joke, warning of a "triple top" of the S&P 500 (^GSPC 2.47%). Note that the index's triple-top pattern was brought up last year, and the S&P has gained more 10% so far this year. The joke also included the chart below, described thus: "Delinquency rates are slumping, bitcoin values are rising, and the gold-dollar differential reflects a bullish pullback near the sustainable tail end of the post-Ford administration secular bear market's final wave":

True technical analysis looks for trading ranges where a stock's price seems to be supported or resisted, as well as where the momentum will take the price next. Its focus is on the supply and demand of a stock's shares, and as such, it tends to appeal to shorter-term traders rather than long-term investors.

Where charts lead returns
According to a study out of SUNY Albany that reviewed 10,000 portfolios' returns since 1993, managers who used technical analysis had a slight yet statistically significant advantage. The portfolios said to employ technical analysis also had a greater variability of returns, but even so, the returns were generally higher. The findings and the impact on investing can be summed up by the authors' chart: 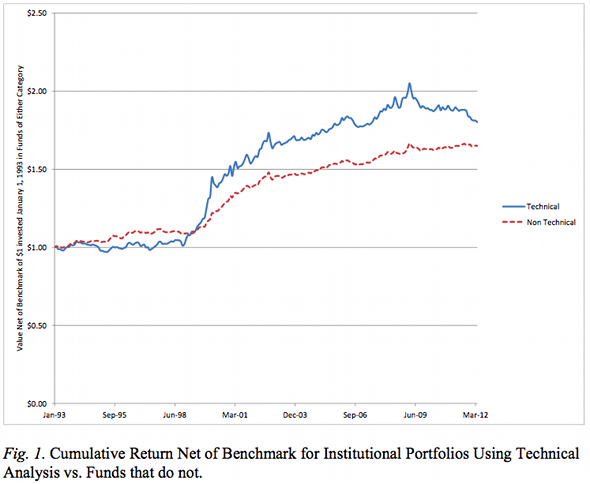 Source: Smith, Faugere, and Wang, "Head and Shoulders Above the Rest? The Performance of Institutional Portfolio Managers Who Use Technical Analysis."

For a dollar invested in 1993, technical-analysis-fueled portfolio managers would have returned more, especially during bear markets.

What about the individual investor?
So should you go buy the latest statistical software and begin crunching numbers on the latest moving averages crossed with the lunar calendar? The data from this study says yes. But realize that these technical portfolios also employed the strategies that have worked for the life of the stock market: fundamental analysis of the financial statements, future growth potential, low price-to-earnings ratios, and the direction of industries. Also, the individual investor will likely have higher transaction costs than large portfolios, which could easily eat into slightly higher returns.

Further, this is one study of many. The famous Eugene Fama's efficient-market hypothesis states that all relevant information is incorporated into stock prices, and therefore studying past prices can't give you an edge. Fama published a study on technical-based trading that tracked the 30 Dow Jones Industrial Average stocks between 1956 and 1962 and found that a buy-and-hold strategy worked better for 28 of the Dow components.

Add in the fact that individuals can't compete with the computing power and transaction speed of the big firms, and the best course for retail investors is likely to stay with fundamental analysis.