If at first you don't succeed, try again. Skydiving really isn't your sport, though, and high-stakes lawsuits seem iffy as well.

A Texas jury found Cisco Systems (CSCO 3.34%) not guilty of infringing on the patented security innovations of VirnetX (VHC 1.67%) last month. VirnetX shares have been falling ever since, and the stock price is less than half of what it was before that crucial Cisco verdict. Meanwhile, Cisco investors hardly noticed the event at all. 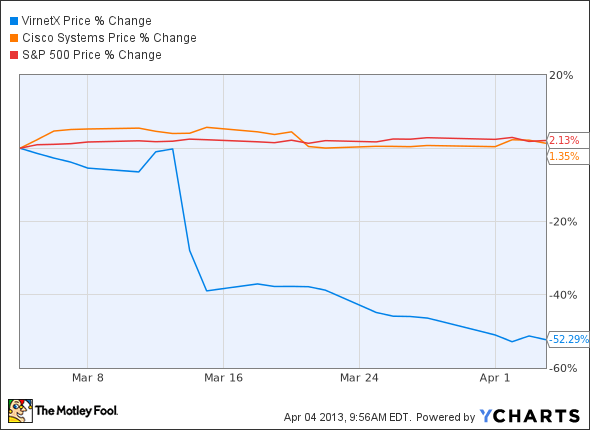 The company isn't appealing the Cisco decision to the next judicial level. Instead, VirnetX is asking for a whole new trial. The market response isn't positive; VirnetX lost another 2% of its value this morning.

The action smacks of desperation. Here's how CEO Kendall Larsen justifies this choice: "VirnetX fully believes in the jury system. We hope that with a new trial, a jury can decide the issues of infringement and damages based on the judge's instructions and the merits of our claim."

Well yes, a jury can indeed decide the issues based in case merits and the judge's instructions. In fact, that's what they just did. Larsen may not like the outcome, but he's asking for a remedy that looks a lot like the alleged disease.

Didn't Albert Einstein quip that insanity is "doing the same thing over and over again and expecting different results"? I think that witticism applies to VirnetX today. I see no reason why another jury would reach a different verdict in this case.

The wider powers of the appeals bench might change the outcome, but VirnetX isn't going there.

The motion will in no way affect VirnetX's ongoing damage-collecting process against Apple, which was found to trample on some of the same patents seen in the Cisco case. It also won't derail the company's "licensing efforts to the 4G LTE mobile markets."

Not that those licensing efforts have been keeping Larsen up all night or anything. His company may be doing research and certainly spends a lot of time in courtrooms, but the business outcome of this activity is negligible. Actual revenues are measured in the thousands, supplemented by court-ordered payments. If the lucrative courts are turning against VirnetX, the business is sure to collapse in short order.

This $877 million market cap floats on a sea of red ink, clinging to dreams of a 4G-powered paycheck that may never come. Gamblers can play around with poker chips like VirnetX, but serious investors should stay far away. My bearish CAPScall on the stock has served me well so far.