To get a better picture of which version of Android users are running, Google recently started using Google Play data. What does the new data mean?

Just the other day, Google (GOOGL 4.20%) reworked how it determines which Android users are using which platform. The change caused the percentage of Android users on Jelly Bean to jump from 16% to 25%. But what does this change really mean?

The largest group of people who will most likely care about the change is Android app developers. Instead of gathering Android platform information when users access a Google server, the company is now looking at when a device accesses the Google Play store. This is relevant data for app developers who need to know which platform versions are most likely to download apps, so they can create apps that are compatible with the greatest number of Android devices.

Let's take a look at how the Android devices break down: 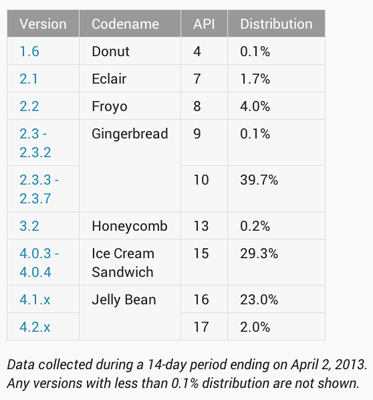 I've written before about which devices developers want to create apps for, and these numbers play a key role in that decision. The smartphone wars aren't just about bigger screens and better cameras -- they're also about whose operating system is the best and how many people are using it.

More than just numbers
There's a back-and-forth battle going on between Apple (AAPL 4.08%) and Google about how up-to-date their smartphone customers are. The problem for Android is that there's major fragmentation across all of the platforms.

According to BGR, Android's Ice Cream Sandwich (version 4.0) was supposed to be the unified platform that brought consistency to Android tablets and smartphones. But after launching in October 2011, only about 30% of Android users are on it, while almost 40% are on a version that was first released in 2010. In contrast, research firm Chitika reported at the end of February that 83% of iPhone users in North America are using iOS, Apple's latest operating system.

Apple benefits from disjointed Android operating systems, given that smartphone user experience is a selling point for new devices. Lack off apps or apps that don't update because the platform is outdated both hurt a user's experience on that device.

But despite the varying Android operating systems on the market, Apple is fighting an uphill battle against the sheer number of Android phones on the market. Although Apple is typically more concerned about revenue market share and than shipment or sales market share, investors should take note that some users simply may not care which OS version they're running. Time will tell whether or not fragmented Android versions will work in Apple's favor, but for now I think the lack of cohesiveness among the Android versions and devices will eventually hurt Apple competitors.