After plunging the past two days, refiners were the market's winners today.

Today's oil and gas stocks leaders were all refiners. Last Friday, the EPA announced new rules for gasoline that include a 67% reduction in sulfur in an effort to improve air quality. On Tuesday, the sector was crushed after a spokesman for Valero (VLO 2.88%) said the company expected the new EPA rules for gasoline would cost it $300-$400 million over the next few years. That announcement sent the stock down 6% on Tuesday, and the sector as a whole fell with it. The decline continued yesterday, as the market was also down. 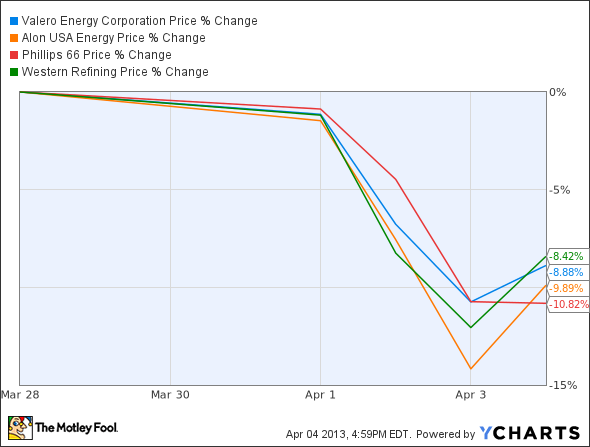 Today, refiners as a whole were up as investors took advantage of the drops in prices.

Among companies with over a $1 billion market cap, today's oil and gas stocks leader was Alon USA Energy (NYSE: ALJ), up 4.95% to $17.16. During the refiners' drop on Tuesday and Wednesday, Alon dropped 12.89%. Despite the comeback today, the stock is still down 8.6% from where it was before the plunge. Alon USA owns refineries in Louisiana and California, 11 asphalt terminals, as well as 300 7-11 retail locations. The company has been profiting heavily from the massive price difference between WTI and Brent crude. In November of 2012, the company IPO'd its Big Springs refinery as a master limited partnership, Alon USA Partners LP, the proceeds of which Alon used to pay down debt.

Second among oil and gas stocks today was Delek U.S. Holdings (DK 4.08%) up 4.78%, to $37.28. During the refiners' drop on Tuesday and Wednesday, Delek dropped 9.88%. Despite the comeback today, the stock is still down 5.6% from where it was before the plunge. The company owns two refineries in Texas, terminals throughout Texas, Arkansas, and Tennessee, and retail stores throughout Tennessee, Alabama, and Georgia.

Third among oil and gas stocks today was Western Refining (WNR) up 4.14%, to $32.43. During the refiners' drop on Tuesday and Wednesday, Delek dropped 11%. Despite the comeback today, the stock is still down 7.32% from where it was before the plunge. Last month, after crushing its earnings, Western Refining announced they were considering launching a master limited partnership for some of their midstream assets. MLP spinoffs have been a hot topic the past year as more and more companies take advantage of investors' hunt for yield, and the tax savings MLPs offer. Fool senior analyst Jim Mueller added to his holdings of Western Refining in February at prices slightly higher than today -- find out why by reading his pitch here.