Please ensure Javascript is enabled for purposes of website accessibility
Log In Help Join The Motley Fool
Free Article Join Over 1 Million Premium Members And Get More In-Depth Stock Guidance and Research
By Travis Hoium - Apr 5, 2013 at 10:33AM

Earnings season is right around the corner and there are a few big energy trends to watch for. Here are the big trends I'm looking at and the companies that hold the keys.

Will oil and gas drilling pick up?
Oil and gas production has been rising in the U.S. but rig counts haven't followed at the same rate. Drillers are becoming more efficient at drilling wells and in field designs as well. This has hurt companies providing rigs and services to the oil and gas industry.

I'll be looking at trends at Halliburton (HAL 1.77%), which saw North American revenue decline 5% sequentially in the fourth quarter due to lower rig counts. Those rig counts are slowly coming back, so investors should watch how that impacts margins and what management has to say about the rest of 2012.

It'll also be important to watch Heckmann, which supplies water and environmental service to drillers, and CARBO Ceramics, which makes ceramic proppants, to see where industry demand and pricing are headed.

Can coal producers survive?
2012 was a terrible year for coal stocks; 2013 will be key to their very survival. It will be important to watch both revenue and net income trends for any sign of health. As you can see below, Arch Coal (NYSE: ACI), Alpha Natural Resources (NYSE: ANR), and Peabody Energy have all been posting huge losses because of the decline of coal. 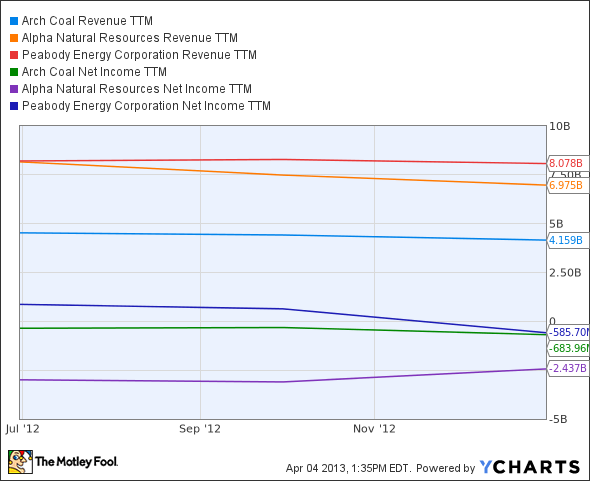 Arch Coal and Alpha Natural Resources will be two to watch closely because of their exposure to high-cost Appalachian coal and smaller exposure to metallurgical coal than competitors. They've both been losing a considerable amount of money per quarter, so they'll have to turn things around eventually or they'll end up in bankruptcy. Considering the continuing low price of natural gas, I don't have high hopes for coal in the first quarter.

Will solar continue its torrid growth pace?
Coal is a declining commodity but the sun is where the future of energy lies. Last year, solar installations grew 76% in the U.S. -- 2013 should see more strong growth. But how will the industry trends play out?

First Solar (FSLR -1.05%) has been the market leader for a decade but a lower-efficiency product and Chinese competition have hurt margins and caused a strategic shift for the firm. The company is now focused on building its own systems with its low-cost modules and best-in-class operational efficiency. But in the fourth quarter, new signings didn't keep up with what the company built, resulting in a lower backlog. This is a warning sign, and with distributed solar in greater demand than large-scale projects, it will be interesting to see what the numbers and comments First Solar releases have to say about the market's direction.

Speaking of distributed solar, can SolarCity (SCTY.DL) continue to grow signings and installations? And more importantly, will it make progress toward profitability? This is a disruptive company in solar but it has few competitive advantages and it still doesn't make a profit, so I'm interested to see how it is trending at the start of 2013.

An exciting quarter ahead
The energy industry is changing quickly and 2013 will be a transitional year. First-quarter trends can give investors an idea what to expect for the rest of the year and where profits are headed.