With an eye towards the mobile revolution, it helps to have an engineer at the helm.

Over the past few days, I've covered CEOs 25 through 6. Today, I'm going to introduce you to the company with the 5th-highest-rated CEO, give you some background on the company, and at the end, I'll offer access to a special free report on who is going to win the war between the five biggest tech stocks.

Qualcomm (QCOM 2.87%)
For those who might be unfamiliar with Qualcomm's business, it's a two-headed beast that's been performing exceptionally well.

On one hand, 60% of the company's revenue comes from its wireless chips business. That means that it designs and manufactures chips for uses around the world. On the other hand, the company's portfolio of patents and licensing accounts for 85% of net income before taxes.

While continued revenue from the licensees and patents will require further investment in research and development, the company's chips are well positioned. As Fool colleague Evan Niu recently pointed out, although the company gets a lot of press for providing baseband chips for Apple (AAPL 1.67%), it won't meet its death if Apple's upcoming earnings fail to impress, as many are expecting them to.

That's because Samsung's Galaxy S4 units, expected to come out this month, use both baseband and processor chips -- giving investors twice the exposure to the smartphone company that presents the greatest challenge to Apple today.

But the real reason to get excited about the company is its prospects moving forward. Many of the company's patents cover 3G technologies that make mobile access to the Internet possible. With 1 billion smartphone users worldwide, you'd think that the company had already tapped out its potential markets. But nothing could be further from the truth, as smartphones make up only 17% of all mobile subscribers. 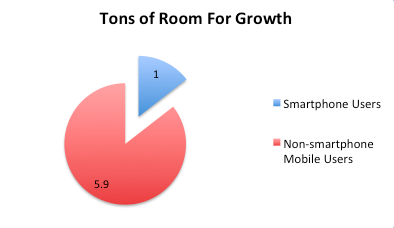 Leadership to match the opportunity
At the center of this opportunity from the transition to mobile Internet usage is Qualcomm CEO Dr. Paul E. Jacobs. Jacobs has served as CEO of the company since March of 2009, but his tenure at the company is much longer.

In 1990, Jacobs joined the staff at Qualcomm as an engineer working on cell phone digital signal processors. His background and experience means that Jacobs is not only a manager, but a leader who is gifted with intimate knowledge of how Qualcomm's technology works, and how it is differentiated from the competition.

Clearly, that kind of knowledge alone makes Jacobs valuable. But the fact that his employees give him a 95% approval rating goes beyond that. A quick look through employee reviews shows they almost universally praise the culture that's been cultivated at the company, with a sense of teamwork, camaraderie, and innovation mentioned almost uniformly.