The U.S. international trade deficit improved slightly in February, according to a Commerce Department report (link opens a PDF) released today. The total deficit dropped $1.5 billion, to $43.0 billion, due primarily to a boost in goods exports. Market analysts were pleasantly surprised by the news, having expected a slight worsening to $44.8 billion. 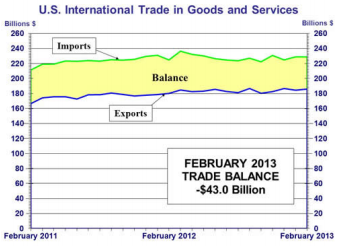 Services exports and imports both bumped up $0.2 billion for February, but exports ($53.8 billion) continue to heavily outweigh imports ($36.5 billion).

In the past year, the overall trade deficit has managed a $1.6 billion decrease, reflected by a 3.2% increase in exports outweighing a 1.9% bump in imports.