The aluminum maker traditionally starts off the season.

Spring is finally here, and a new earnings season is right around the corner. Next Monday Alcoa (AA) will get us started by releasing its latest quarterly results. The key to making smart investment decisions on stocks reporting earnings is to anticipate how they'll do before they announce results, leaving you fully prepared to respond quickly to whatever inevitable surprises arise. That way, you'll be less likely to make an uninformed, knee-jerk decision.

Alcoa has the smallest market cap of any member of the Dow Jones Industrials (^DJI 1.64%), but it has the honor of being the first Dow component to report its earnings every quarter. Let's take an early look at what's been happening with Alcoa over the past quarter and what we're likely to see in its quarterly report on Monday.

Will Alcoa finally start to rebound?
Analysts aren't too optimistic about Alcoa's earnings prospects this quarter: They've cut their estimates substantially over the past few months, reducing their consensus for the just-ended quarter by $0.03 per share and their full-year 2013 call on EPS by $0.09. The shares have also continued their slow decline, falling by 5% since the beginning of 2013.

In an overall positive environment for the Dow, Alcoa has lagged behind during the past quarter. Given major concerns about the health of the global economy, signs of strength in the U.S. haven't been enough to pull Alcoa out of its long-term funk. 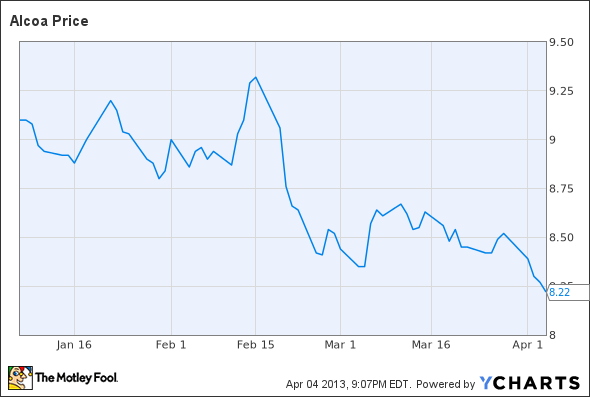 But the aluminum giant has hope that conditions will improve eventually because of the strength of some of the sectors that represent its greatest sources of demand. Last quarter CEO Klaus Kleinfeld identified three key industries as potential drivers of growth for Alcoa: automobiles, aircraft, and heavy trucks and trailers. Kleinfeld sees aerospace climbing 9% to 10% in 2013, compared to a 2% to 7% rate for heavy trucks and trailers and a 1% to 4% range for autos globally.

Given enough time, those hopes may pan out. Boeing (BA 1.26%) has been using more aluminum in its jets in order to decrease weight and increase fuel efficiency. Automaker Ford (F 2.08%) has concentrated some of its biggest high-growth bets on China, and with Alcoa seeing the country as the primary contributor to its growth, Ford's efforts there will be important to Alcoa's success.

In Alcoa's quarterly report, watch closely for the company's CEO to give his views not only on Alcoa but on the state of the global economy. What he says could set the tone for the entire earnings season.

Click here to add Alcoa to My Watchlist, which can find all of our Foolish analysis on it and all your other stocks.