Please ensure Javascript is enabled for purposes of website accessibility
Log In Help Join The Motley Fool
Free Article Join Over 1 Million Premium Members And Get More In-Depth Stock Guidance and Research
By Travis Hoium - Apr 6, 2013 at 10:30AM

Maybe peak oil theorists have had it wrong all along.

Peak oil theories have been around for decades. Marion King Hubbert accurately predicted a peak in U.S. oil production in 1956, in the first widely published peak oil theory. Since then, people have been predicting when demand would exceed supply and the dire economic consequences that will come along with it.

But what if the peak oil theory is completely wrong? What if scarcity of oil never becomes a problem and the eventual decline in oil usage is due to falling demand, not shrinking supplies?

There's growing evidence that global oil supply is fairly abundant and consumers are using less oil. I'll outline why I think oil demand will peak by 2020 and why, eventually, alternative energy forms will bring the ultimate downfall for black gold.

Fuel efficiency becomes sexy
Over the past decade, a strange thing has taken place. Oil demand has declined in developed nations, almost across the board. U.S. demand peaked in 2005, Japan in 2003, and Germany way back in 1998. For Europe as a whole, the peak was in 2006. 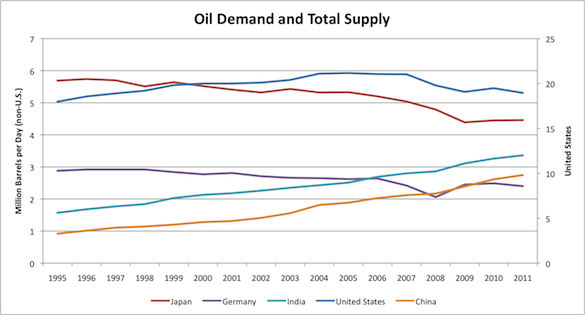 The global recession drove some of the decline in oil demand, but demand was falling before the recession and continues to fall even as the economy recovers. The drivers of this declining demand show why a fundamental shift in the energy sector is beginning to take place.

In the U.S., one factor is that we're driving less, as fellow Fool Morgan Housel recently pointed out. He notes that more people live in urban locations or work from home and that demographic shifts have been part of the decline.

More efficient vehicles are another major factor in declining oil demand today, and this trend is picking up steam. U.S. drivers have shifted demand from gas-guzzling SUVs to more fuel-efficient cars. Hybrid sales have also increased, even in the SUV market. Over the next decade, automakers will be fighting to reach the new 54.5-mile-per-gallon fuel economy the Obama administration set last year, a target that will continue the drive to reduce oil consumption and may even push alternative vehicles because of the offsets they supply. For example, Tesla Motors (TSLA 7.33%) will be able to sell excess fuel-efficiency credits to other automakers that don't meet fuel-efficiency standards. Honda (HMC 0.76%) will also get incentives for making natural gas vehicles, effectively making these alternatives less expensive.

Since the U.S. is the largest auto market in the world, we can assume that efficient and alternative-fuel vehicles will make their way to other developed countries as our technology and cost structure improves, continuing the downward trend in oil usage.

Environmental concerns will also play a role in the choices consumers make in coming decades. Climate change is a contributing factor to some consumers' behavior, and they're willing to pay more and maybe even drive a less convenient vehicle to do a part in reducing pollution.

Oil fueled growth
Of course, the developing world is a different story from that of the U.S. and Europe. Demand is growing in China, India, Brazil, and other smaller economies, and it's offsetting declines in demand elsewhere. You can see in the preceding chart how quickly these countries are growing their oil demand.

What's interesting about energy trends in the developed world is that it's aggressively building alternative energy technologies, which may turn the tides of oil use. China may be the world's No. 1 solar market this year and it is already one of the world's largest installers of wind. India is a rapidly growing solar market as well, targeting 20 GW by 2020. Solar and wind are by no means a replacement for oil, but they are an indication that these countries are focusing on alternative energies instead of relying solely on coal, oil, and natural gas.

In Saudi Arabia, 54 GW of planned renewable energy is, in fact, a direct replacement for oil-driven power plants. The major oil exporter is finding it cheaper to generate electricity from the sun than from oil, another sign that demand will see downward pressure long-term.

The global picture
When we combine a drop in oil demand in the developed world with a rise in oil demand in the developing world, it has resulted in fairly constant demand over the past decade. In fact, from 2006 to last year, total liquid fuels consumption rose only 0.77% per year. That compares with compound growth of 1.7% from 1995 to 2006. Demand growth is definitely slowing.

As fuel efficiency rises, natural gas finds more uses, and alternatives such as electric vehicles and even solar take hold, the developed world will continue to see a slow decline in oil demand. The question is how fast the developing world will adopt new technologies. That's what will determine the direction of global oil demand over the next few decades.

A bold prediction
When we combine all of the data I've discussed, it leads me to believe that a peak in global oil demand is right around the corner, and it won't be because supply is running out. The peak may not come this year or next, but by 2020 I think we'll be using less oil each year. Cheap natural gas, environmental concerns, and new technologies will drive the reduction in oil usage in developed nations, and eventually those trends will spill into developing countries.

Oil is no longer the most cost-efficient energy, even in transportation, and new technologies will bring down the cost of other energy sources as well. These factors are what will drive the eventual decline in oil consumption, not the scarceness of the resource, as so many have predicted in the past.