Please ensure Javascript is enabled for purposes of website accessibility
Log In Help Join The Motley Fool
Free Article Join Over 1 Million Premium Members And Get More In-Depth Stock Guidance and Research
By Justin Loiseau - Apr 6, 2013 at 9:30AM

Good news and bad news for your dividend portfolio.

From a $1.5 billion wind sale to an unexpected explosion, it's been a busy week for utilities. Here's what you need to know to stay current on your dividend portfolio's profits.

BP winds down wind
BP (BP 0.81%) announced this week that it plans to sell off its $1.5 billion worth of wind farms in an effort to further specialize on high-margin oil production and exploration. The move comes as part of the corporation's larger $38 billion garage sale and is meant to streamline operations and improve efficiencies as the company downsizes.

No buyers have been announced for the corporation's 16 wind farms, but potential buyers include NextEra Energy (NEE 1.08%), Exelon (EXC -0.42%), or Atlantic Power (NYSE: AT). All three utilities have added on wind recently, and as companies continue to specialize in specific energies, more wind could help to boost margins.

Wind comprised 56% of NextEra's generation capacity in 2012, while Exelon spent $650 million in capex last year to add on to its 44 wind projects. Atlantic recently announced that it will focus on natural gas and renewables in the future, and the utility's 2012 acquisition of Ridgeline Energy added three wind farms to its energy portfolio.

The utility's stock has outperformed both the S&P 500 and the Dow Jones U.S. Utilities Index over the past year, and it has popped up an additional 1.5% since Lapides' report. 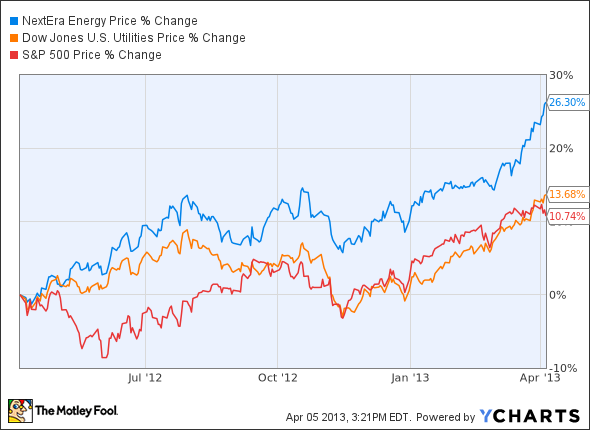 Southern explosion
An explosion shut down one of Southern's (SO 0.11%) largest coal-fired generation plants on Thursday. According to the utility, the explosion occurred during a routine maintenance outage. No employees were hurt, but the cause of the explosion remains unknown and the 3,160 MW plant remains out of commission.

The plant represents 7.3% of the utility's total capacity, but Southern stressed that services to its Georgia customers will continue uninterrupted.

TECO files for rate increase
TECO's (NYSE: TE) Tampa Electric filed a formal request with the Public Service Commission to raise rates by 10% in 2014. Its last request came in 2008, and, according to TECO, its new ask would keep rates 5% below national levels for its Florida customers.

The move comes as part of TECO's plans to raise an extra $135 million to cover rising energy costs. The Public Service Commission is expected to consider TECO's ask later this year, with a final decision delivered by the end of 2013.