Apple put up a strong showing during last April's earnings, with iPhone sales holding up rather well. Can the company do it again, or will the headwinds prove too tough?

In just over two weeks, Apple (AAPL -0.05%) will be stepping up to the earnings plate to try and redeem itself after last quarter's relentless sell-off. Fears have begun mounting lately that the company may miss its own revenue guidance as well as consensus estimates.

As usual, all investor eyes will be on iPhone units, since the company's flagship smartphone remains the primary revenue generator these days. Last year, iPhone sales were remarkably resilient coming out of the holiday quarter. Can iPhone units hold up again this quarter?

Last time around, the company posted just a 5.3% sequential decline in iPhone units to 35.06 million, after selling a then-record 37.04 million iPhones the prior quarter. Heading into last April earnings, bears were interpreting weak activation figures out of domestic carriers as evidence that iPhone units were in store for some downside. The iPhone maker proved them wrong by significantly boosting international iPhone unit sales from 63% to 74%, more than offsetting any domestic weakness.

This time around, the median Street estimate calls for Apple to sell 37 million iPhones. That's still an impressive figure by any measure, but it's also a larger sequential decline than last year. 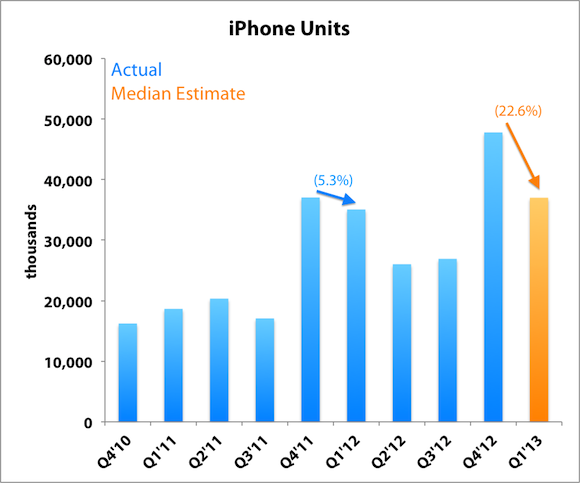 Selling 37 million units would represent a sequential decline of 22.5%, but year-over-year growth of 5.5%. Let's look at what could affect iPhone figures this quarter.

This year's iPhone 5 saw a faster global rollout than ever before, which actually may bode badly for this quarter's figures. The slightly slower rollout of the previous iPhone 4S meant that pent-up demand in other countries took two quarters to be fulfilled, while a faster rollout could imply that much of international demand had already been met in the fourth quarter.

While skeptics will say that the iPhone 5's upgrades were mostly incremental, they also said that about the iPhone 4S and were silenced by that model's strength. Speaking of iPhone 4S buyers, the surprisingly large number of iPhone 4S buyers aren't eligible for upgrades quite yet, and may have to wait until the expected iPhone 5S comes out later this year.

Rumors continue to increasingly affect Apple's sales, and there's been highly publicized talk of a shorter iPhone product cycle this year. New models are expected this summer, which could cause some potential buyers to wait.

Competition has also been intensifying recently, but most of the flagship smartphone unveilings won't launch until this quarter. Both Samsung's Galaxy S4 and HTC's One launch later this month. BlackBerry's Z10 launched during the quarter, but didn't reach the U.S. until late March.

There are some definite headwinds that Apple faces this quarter with iPhone sales, but investors won't have to wait long to find out.