Let's see what the numbers say about Netflix (NFLX).

Investors love stocks that consistently beat the Street without getting ahead of their fundamentals and risking a meltdown. The best stocks offer sustainable market-beating gains, with robust and improving financial metrics that support strong price growth. Does Netflix (NFLX 1.90%) fit the bill? Let's take a look at what its recent results tell us about its potential for future gains.

What we're looking for
The graphs you're about to see tell Netflix's story, and we'll be grading the quality of that story in several ways:

What the numbers tell you
Now, let's take a look at Netflix's key statistics: 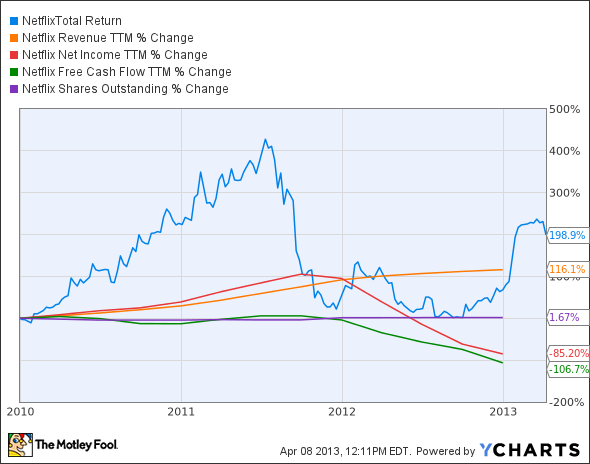 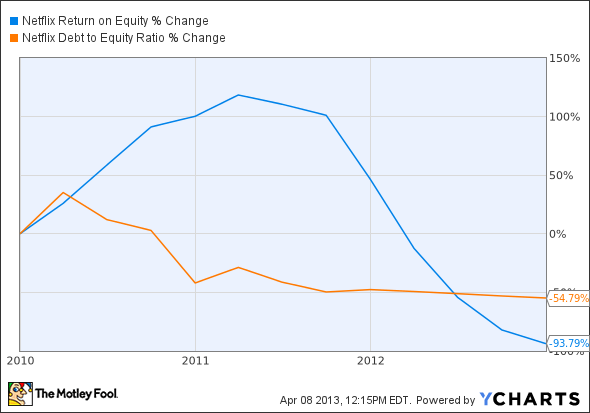 How we got here and where we're going
Netflix's performance -- with the exception of the huge bounce in its stock price -- has not been pretty. Investors have to be wondering what's behind that big bounce and whether it will hold up over the long term. Netflix needs to really clamp down on its costs to improve on a two-out-of-seven performance here. Can it, or will it? Let's dig a little deeper.

The big news this year isn't so much Netflix's progress (although it's made some), its new in-house shows (although more seem to emerge every week), or its subscriber growth (although that continues apace.) The real story for Netflix shareholders is undoubtedly the massive earnings-related price spike that seems to say "It's nothing but clear skies ahead." As a result, much of the commentary has since focused on the share price, and Netflix's ability to sustain it. Here's a brief list of some good starting points for further valuation-based research:

There are plenty of arguments on both bull and bear sides of the Netflix fence. On the bull side, we've got the expectation of market dominance leading to greater profitability as pretenders fall away like so many clumps of powdered sugar from a delicious donut. Mmm, donut. And on the bearish side, we've got the purported threat of Amazon.com's Prime, Coinstar's Redbox (and soon-to-be Redbox Instant), and a push of content providers into uncharted pay-as-you-go turf.

I debated Netflix's merits with my fellow Fools Sean Williams and Travis Hoium two months ago, and we all agreed: This stock is too hot to handle. Since then, on a fairly limited time frame, we've been proven correct, earning 15 points so far from our underperform call on CAPS.

Little has changed since then except share prices -- Netflix's only major unexpected move (new in-house shows are starting to become a matter of course) has been integrating with Facebook (FB 4.24%), which promises more "social" video options. There's not much downside to the social tie-up, but there may not be quite as much upside as some pundits claim. Netflix already has the edge on content over Amazon and Coinstar, and it's unlikely that many people will be sticking around for more Netflixing just because they can see that their friends have just watched the latest episode of Mad Men. I can already see when my Facebook friends watch a popular show, because they're already posting about it. Facebook might help Netflix CEO Reed Hastings share important updates with stockholders, but that's not much of a tangible benefit in today's instant-news environment

Netflix continues to scoop up content, but in some cases the payoff may take years to arrive. Will investors continue to bid shares higher until 2016, when a big agreement with Disney activates? Disney is undeniably a big draw, but so much could happen between now and then. Cable providers may finally bite the bullet on a la carte service. Amazon might shift its video efforts up to maximum overdrive and sign Disney up as well. Netflix's huge spending outlay on original series might produce nothing but flops and red ink. All of this remains to be seen. Is Netflix worth $225 or $22.5 per share? Much will depend on the market's reaction to Netflix's next earnings report.

Putting the pieces together
Today, Netflix has few of the qualities that make up a great stock, but no stock is truly perfect. Digging deeper can help you uncover the answers you need to make a great buy -- or to stay away from a stock that's going nowhere.