Does Mondelez need to favor risk to grow revenue?

It may seem curious to investors of a certain stripe that Mondelez International (MDLZ 0.32%) spun off its Kraft grocery business in October of last year in order to shoot for long-term organic revenue growth of 5% to 7%. But among mature global food and beverage companies, this type of expansion is often considered ambitious. For example, competitor Campbell Soup (CPB 0.95%) grew its international snack and baking business by only 2% in fiscal 2012. Surprisingly, Mondelez has had some trouble hitting its targets in its first two quarters as an unchained $35 billion powerhouse. After posting organic revenue growth of only 4.4% in 2012, will the company find its momentum in 2013?

The soft spots
Industry trends including soft gum and candy sales, and lower coffee pricing (due to recent bumper crops), have weighed on Mondelez's near-term results. The company's revenue growth will hover around the "low end of the five to seven [percent] range" for the time being, according to CFO Dave Brearton. Management has indicated that it is not so concerned with one-off events such as the weakness in coffee prices, and has affirmed that it will make up for lost ground in the back half of 2013. Yet investors would like to know that Mondelez can consistently scale its revenue regardless of the headwind of the moment.

The growth sweet spot
The fuel for Mondelez's future growth will likely be found at the intersection of the following three themes: power brands, developing markets, and the categories of biscuits (i.e., cookies and crackers) and chocolates. In essence, the biggest and most loved brands, sold in the fastest-growing developing markets (such as China and India), within the two categories that represent almost 60% of Mondelez's business.

Mondelez currently has nine billion-dollar brands (including names such as Oreo and Cadbury), and its power brand portfolio boasts a growth rate of 8% -- almost double the company's overall growth rate. In developing markets, power brands are growing at an annual rate of almost 20%. Economists tell us that "power brands" evoke a high degree of loyalty and emotion from customers. Thus, they tend to be more price-inelastic than regular goods -- that is, consumers will stomach higher prices for their favorite brands versus goods to which they are not attached (and for which many substitutes are exist). So it makes sense to invest in these brands at the expense of weaker products: 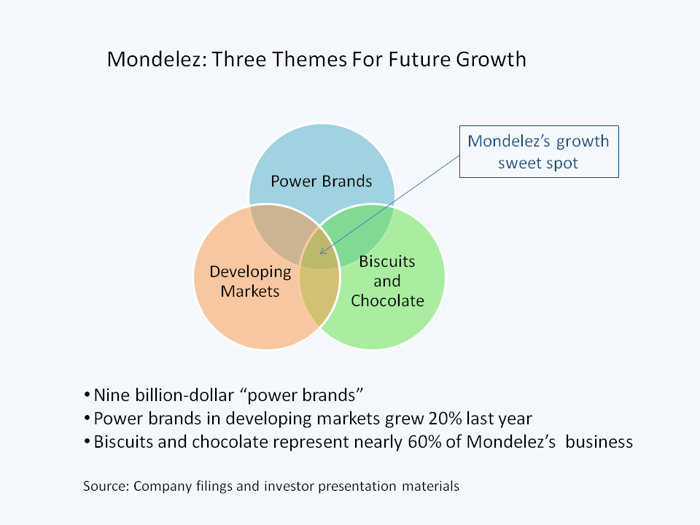 An abundance of caution?
While the idea of allocating resources to killer products is already a staple of Mondelez's business plan, the company may need to push beyond its comfort zone and somewhat overload its marketing investment in these brands. Mondelez is admirably disciplined on the operational side. It improved operating income margin by 110 basis points from 2010 to 2012. By its own calculation, Mondelez showed the most improvement in this metric within a peer group that included Hershey (HSY 1.23%), Unilever (UL 0.68%), and Nestle (NSRGY -0.25%). What would happen if the company took on some additional risk, and sacrificed, say, a percentage point of that margin to marketing expense to ensure top-line growth?

One percentage point of operating margin for Mondelez is roughly a third of a billion dollars. Relatively speaking, that's not a huge amount: If the entire sum went to marketing budget, it would increase total annual SG&A, or sales, general, and administrative spending, by about 4%. The company could fund this by forgoing some of the excess $1 billion in cash flow it expects to generate over the next two years. Management has signaled that a portion of the projected cash flow excess may be used to increase the current dividend modestly, or to buy back shares to reduce dilution from recent equity compensation. These ideas don't seem very bold; in fact, they seem almost a holdover from the legacy Kraft business. To be fair, Mondelez is increasing its capital expenditure, or capex, as a percentage of net revenue, from its current 3.8% to a long-term target of 5%. Part of the capex will be allocated to bringing new plants online in developing markets including India, China, and Brazil.

Risk appetite
If Mondelez continues to shine in the area of operating margin while simply meeting the low end of the expected revenue range, its strategy will rightly be challenged, especially when competitors such as Unilever and Nestle have demonstrated recently how to exploit great brands for top-line improvement. Unilever grew its sales 10.5% last year, from 46.5 billion euros to 51.3 billion euros, with organic growth coming in at almost 7%. Similarly, Nestle stretched its sales from 83.6 billion swiss francs to 92.0 billion swiss francs, a 10.2% gain, of which nearly 6% was attributed to organic growth. Both companies are considerably larger than Mondelez, and they're growing faster.

Mondelez has already taken outsize risks in spinning off Kraft and gunning for developing markets. While the company works hard to build a desire for its products around the world, its shareholders may be jonesing for a little less caution on the execution side in the coming quarters. If you're considering investing in Mondelez, keep your eyes on the organic revenue growth number in the near term, and more important, watch management's approach to it.

Fool contributor Asit Sharma has no position in any stocks mentioned. The Motley Fool recommends Unilever. We Fools may not all hold the same opinions, but we all believe that considering a diverse range of insights makes us better investors. The Motley Fool has a disclosure policy.