Shares of Monster Beverage (MNST 1.06%) rose nearly 5% Monday after the company's board of directors approved a $200 million share repurchase program. As management stated recently, the company had already used every penny of the $250 million it authorized for share repurchases less than five months ago, so it looks like they were just itching to continue increasing shareholders' slice of the pie.

Even so, I suppose this latest authorization shouldn't have come as much of a surprise considering the company managed to spend more than $737 million in 2012, buying back shares at an average price of $54.47 per share -- or about 3% below yesterday's closing price.

Does it make sense?
Okay, we get it; the folks at Monster are trying to send investors a not-so-subtle message that they think their stock is undervalued.

But the question remains: Is it cheap in reality?

To their credit, the stock is trading 37% below its 52-week-high set last June. Even so, that's because the company not only made investors suffer through a few subpar earnings reports amid slowing sales, but also continues to face unrelenting heat from consumers and regulators alike after its high-caffeine energy drinks were investigated as potential culprits in five deaths.

As I wrote last month, however, the FDA did later clarify they found no conclusive links between Monster Energy and the deaths in question. Even still, that hasn't stopped the calls for increased regulation of its products by researchers and public health experts, and this controversy is one big reason I remain hesitant to touch the stock.

What's more, while Monster's current price-to-earnings ratio of 28.3 is certainly an improvement over last year's high mark of just under 48, that doesn't necessarily mean its shares are cheap today. Rather, considering Monster's average trailing P/E ratio over the last five years is 26, it more likely indicates the stock was simply overpriced last June. 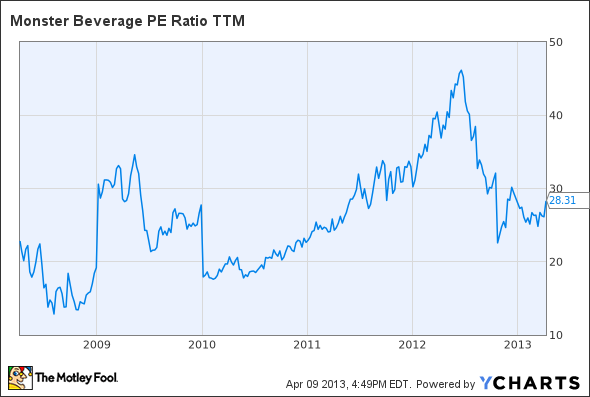 So let's try something a little less scary...
In the end, I'm still not convinced there's anything particularly compelling about shares of Monster at current levels.

Instead, I'd much prefer sticking with a company like Coca-Cola  (KO 0.59%), which boasts a ridiculously wide moat and has demonstrated long-term staying power. While Monster's core business relies on high-octane endorsements and caters to a relatively niche group of consumers, Coke's wide appeal has helped it thrive for more than a century. And, for patient investors, it's a safe bet Coke will be there to quench our thirst decades from now.

However, if Coke isn't exciting enough for you, why not take a look at industry up-and-comer SodaStream (SODA), which has made a habit of getting its ads banned -- to its benefit -- by aggressively panning bigger competitors like Coke and Pepsi and differentiating its own at-home carbonation solution as a superior, environmentally friendly alternative. Even better, SodaStream also gives weary Monster investors a way to play the energy drink market as it continues to build on its own energy drink offerings. If energy drinks go by the wayside, SodaStream can just as easily shrug it off and fall back on its core business of traditional soda products.