Is it finally time to buy stock in Chesapeake Energy or should you simply stay away?

Few stocks in oil and gas industry are more hotly debated than Chesapeake Energy (CHKA.Q). Former CEO Aubrey McClendon really seemed to live up to the wildcat reputation of a typical Midwestern oil man. Unfortunately, that never sat well with investors, and he recently rode off into the sunset by taking an early retirement.

While a new leader has yet to be hired, the company that person will inherit is one that's still in transition. Should you buy the stock now knowing it has nowhere to go but up? Or is caution the better part of valor, with the best view being from the sidelines?

While those low prices are currently a problem for Chesapeake Energy and investors in its stock, it does give a hint at its future potential. Demand for natural gas is heading higher, which over time should push its price up as well. In the future, that demand will come from a variety of new sources, including chemical and electrical production as well as an increase in the use of natural gas as a transportation fuel.

Until that demand is realized, Chesapeake Energy is spending billions to grow its oil and natural gas liquids production. The company is now the 11th-largest liquids producer in the country, and production is growing every day. As you can see from this map, the company has a foothold in some of the best-producing areas of the U.S.: 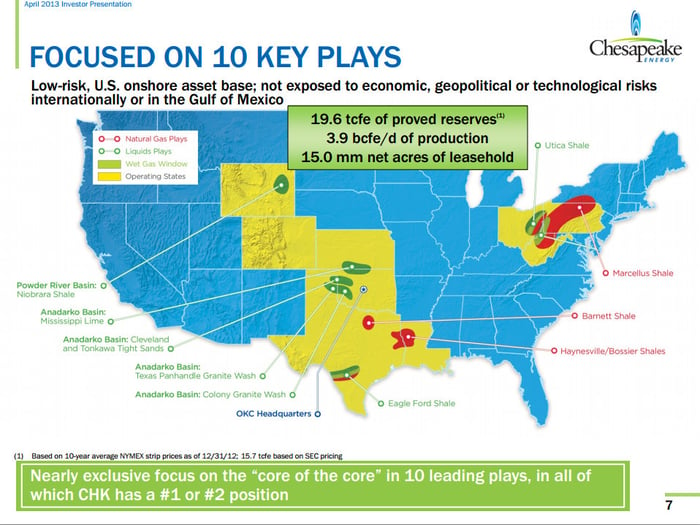 This transition will fuel the company's near-term profits while a recovery in the price of natural gas will really boost the long-term value its stock.

So, what's the downside here?
The company's growth has come at a great cost, with too much of it funded by debt. If there's one recurring theme among smaller oil and gas companies it's that too much debt has been compounded by too much natural gas production. That's one reason why the stock of SandRidge Energy (NYSE: SD) has been crushed over the past few years. That company is in the midst of its own turnaround and has been following the same playbook on liquids growth as Chesapeake Energy. However, that's not easy to do while also trying to get out from under the weight of debt.

At last count, Chesapeake Energy had $12.6 billion in both senior debt and term loans outstanding, with an average maturity of less than five and a half years. That's not so bad when you consider that the company should produce more than $5 billion in operating cash flow this year if gas stays above $4. However, it's taking that money plus another billion and plowing it back into its drilling program. In order to make ends meet the company has turned to asset sales.

It's already sold a slice of its Mississippian acreage to a Chinese company and is planning to sell its stake in the champion of natural gas as a transportation fuel, Clean Energy Fuels (CLNE 5.50%). The problem with these asset sales is that everyone knows that Chesapeake needs the money, so it's not going to get full value for the assets. The bottom line is that you simply cannot run a company on asset sales alone, especially when a heavy debt load is behind those forced sales. Until Chesapeake Energy can live within its cash flows, the company's stock will likely be weighed down.

The bottom line
Chesapeake Energy is one of those companies that comes with both great risk and the potential for great reward. If you're the type of investor that likes that type of scenario, then buying Chesapeake Energy's stock might be right up your alley. However, if risk isn't something that allows you to sleep at night, you're better off just watching this one from the sidelines.