No one else has Starbucks' pricing power and brand loyalty.

Starbucks (SBUX -2.30%) has a lot going for it as an investment: sector leadership, loyal fan base, expanding global footprint, and strong financial fundamentals. Is that enough to justify its addition to your portfolio today? After all, we don't invest based on where a company has been but where it's going. The past offers a useful guide to the shape of a company's future, but it can't paint in too many details. We've got to do that ourselves.

Let's take a closer look at Starbucks' fundamentals to see if it really is the top-notch investment it's held up to be.

Under the lid
My fellow Fool Sean Williams has already given a bullish take on Starbucks, focused on the company's ability to handle new challenges and find new sources of growth. I'd like to look at the numbers behind that growth. Let's start with some fundamentals -- revenue, earnings per share, and free cash flow: 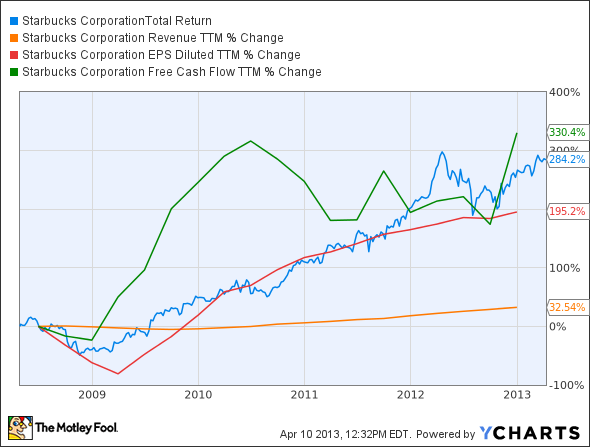 This is a pretty empathic vote in Starbucks' favor. Not only has EPS grown far in advance of revenue, but Starbucks' free cash flow has consistently grown even faster. It's great to see a company consistently pushing its profitability higher, even though 33% growth in revenue isn't too shabby, either. However, there's one potential red flag here -- since the start of 2012, Starbucks' share price has grown beyond its earnings per share, leading to higher valuations than usual: 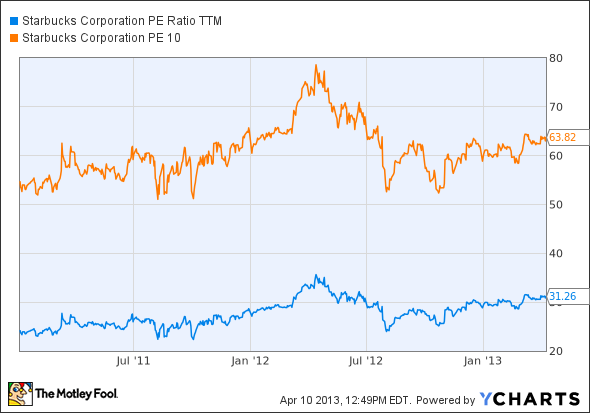 The P/E 10 ratio is the company's current share price divided by the average of its last decade's worth of earnings per share. Starbucks isn't that old, but it's grown so quickly in the past decade that the relevant numbers of even four years ago have been left in the dust. On the other hand, it is worth noting that Starbucks' standard P/E ratio has actually grown faster than its P/E 10 ratio -- it's up nearly 30% since the start of 2010, compared to a 17% increase in the P/E 10. Is that really significant? Not particularly -- Starbucks' average P/E over the last two years is 27.4, fewer than three points below its current valuation. The company was more highly valued in mid-2012. I wouldn't worry too much about it, as Starbucks has consistently shown that it can outperform on the fundamentals.

There is one simple economic trend that's worked in Starbucks' favor: coffee prices. After a big run-up from 2009 to 2011, the price of coffee has gone back to levels last touched five years ago: 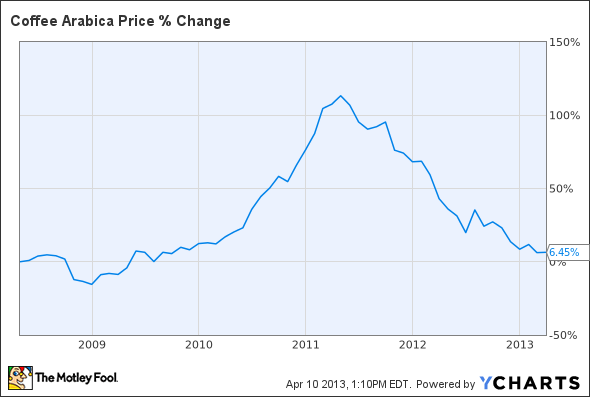 Compare this to the first graph, particularly to Starbucks' free cash flow. Both coffee prices and free cash flow crept higher at roughly the same rate. When the price of coffee declined, Starbucks kept the cash flowing just as well as before. Pricing power matters here, and few brands have the power of Starbucks. Both J.M. Smucker and Kraft cut the prices of their packaged coffees in February to entice consumers. Starbucks hasn't lowered prices in its stores since 2009, and has no reported plans to reduce the costs of its brews despite this downward trend.

The greatest threat to Starbucks is purportedly McDonald's (MCD 2.25%) and its McCafes or Dunkin Brands (DNKN) and its popular anti-Starbucks branding. These are legitimate threats, but do they really strike at the heart of what makes Starbucks work? Probably not -- neither restaurant chain has ever been seen as a gathering place or a social hub, and I doubt that either will somehow convince the world otherwise anytime soon. The "accessibility" of Starbucks is one of its greatest assets, encouraging customers to come and sit for a while, and it's something no other beverage slinger has really managed to replicate.

Starbucks may not be able to grow forever, but it should be able to push ahead of the pack for some time longer. Consider this stock a solid cornerstone for a long-term portfolio: steady, stable, durable, and market-beating. Plus, it pays you back, with a dividend that's already doubled since mid-2010. What's not to like?