Are corporate profits actually worrisome for the stock market?

Who would have thought that profits could be putting fear in the hearts of market watchers?

Just yesterday, Robert Lenzner at Forbes wrote that the current rate of corporate profits "will eventually revert to the mean, spoiling the party." Lenzner isn't alone. And many of those not focused on mean-reverting corporate profits torpedoing the markets and economy are bemoaning the fact that wages haven't kept up with the jump in profits. On Fool.com, Morgan Housel took a look at just that earlier this week.

On its face, the case for high profits being worrisome makes sense. Based on numbers from the Federal Reserve, corporate profits were 11.2% of U.S. GDP as of October 2012. That compares to an average of 6.1% going back to 1950. Some of that may reflect a shift in dominant industries -- today, manufacturing companies account for a lower share of the economy while financial and service businesses have a higher one. But considering those numbers, it seems almost silly to think that the corporate profit share won't fall in the years ahead.

So let's assume for a moment that it's not a question of whether corporate profits will fall -- let's just assume they will. Now we can focus on the more important question for investors: Would a fall in corporate profits hurt the stock market? 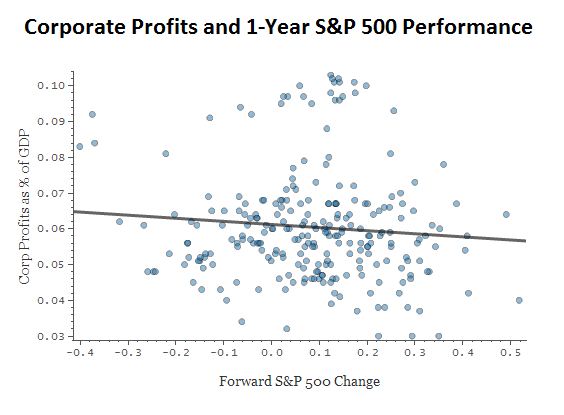 If the plots look random, it's because they are. Based on this data -- which goes back to 1950 -- there's no statistically significant relationship between past corporate profit levels and the performance of the S&P 500 (^GSPC -0.12%) over the next year. But a year is like the blink of an eye on the stock market. Let's take a look at forward five-year S&P 500 performance. 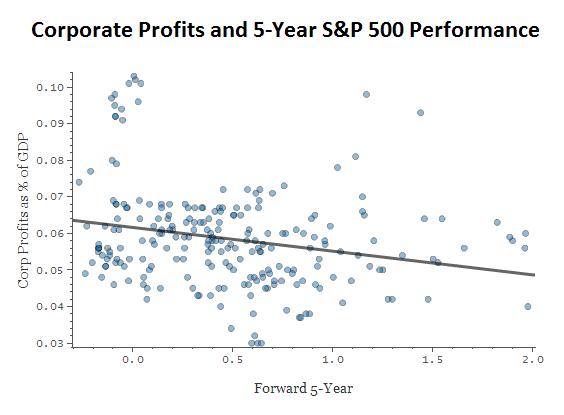 This time, the data looks like it has more going on. As the Statwing analysis describes it, the two sets of data are "weakly negatively correlated." In plain English, the higher corporate profits are, the worse the S&P 500 tends to perform over the following five years. 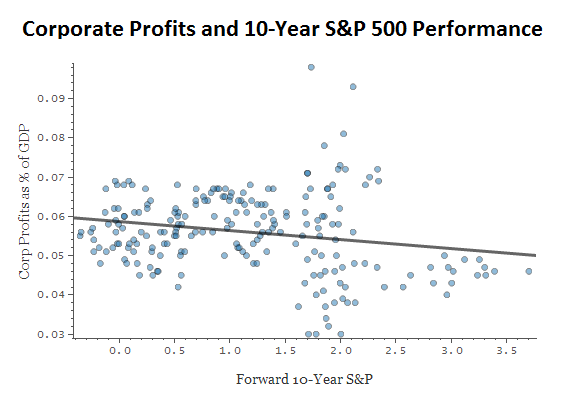 Once again, Statwing tells us that there is a weak, but significant negative correlation between corporate profit levels and the performance of the S&P 500 over the next decade. However, when we move out to 10 years, the relationship actually weakens, and starting corporate profit levels could be said to "explain" less of the change in the stock market.

So if we go back to the logical story that we started with -- that when corporate profits are high, they're in a position to fall, and therefore will be bad for the stock market -- we can say that the numbers clearly back that up.

But hang on a second... let's look at just one more chart. 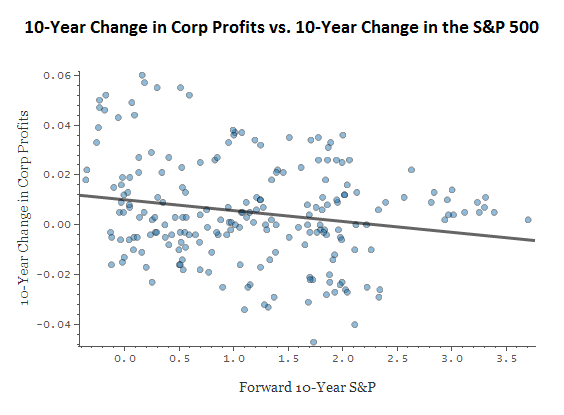 This time, rather than looking at the starting value of corporate profits as a percentage of GDP, I looked at the change in that percentage over the next 10 years. And this shows that the S&P 500 performed better when corporate profits were falling! Now doesn't that just screw everything up?

If we take this final chart at face value, instead of being bearish about the potential for corporate profits to fall as a percentage of GDP, we'd now have to be bullish. [Cut to shot of statisticians' heads exploding.]

It's tempting to think that we can find uber-simple signals like this that will give us magical insight into where the market's headed -- humans, after all, love patterns. But all too often, there's more than meets the eyes when it comes to data and how we evaluate it. Here, as we saw, the conclusion is flipped entirely on its head simply by looking at change in corporate profit share rather than the starting level of corporate profit share.

There are also plenty of confounding factors -- for instance, as mentioned above, the change in the composition of the U.S. economy. And while there may seem to be many individual yearly observations that we can use for our analysis, the truth is that there are longer periods of high and low levels of corporate profits. The number of those periods that we can study are few enough that even a Stats 101 student could tell us that little we find will be truly statistically significant.

The bottom line is that predicting the direction of the economy and stock market -- particularly on the basis of any single metric -- is a (small f) fool's errand. Instead, the best bet for investors is (still) finding the right businesses to invest in over the long term, or simply using low-cost index funds to buy the entire market.

I know, it's not a particularly sexy conclusion. But you know what is sexy? A fully funded retirement.