Investors in Range Resources have done quite well over the past year. The stock could climb even higher thanks to two core competencies of the company

Investors in Range Resources' (RRC -1.17%) stock have been well rewarded over the past year. While the market is up about 12%, Range Resources' stock is up almost 40% over that same time frame. While rising natural gas prices are playing a role, Range Resources has the foundation already in place to continue to deliver outstanding results.

Focus on growth per share
Range Resources is focused on the per-share growth of both production and reserves, on a debt-adjusted basis. It's not a common practice in the industry as most of its peers are simply focused on growing or, worse, working feverishly just to adjust that debt burden lower. Range Resources per-share focus instead reminds me a lot of Devon Energy (DVN -0.90%). Both companies are focused on deploying capital on higher returning projects while not overspending and becoming too heavily indebted.

This focus has enabled Range Resources to grow production per share of its stock by 15% annually since 2007. Last year it nearly doubled that rate as production per share was 29%. The company believes it can continue growing at that higher pace and sees its production growing by 20%-25% per year for the foreseeable future.

Low-cost producer
Range Resources isn't a company that seeks growth at all costs. Over the past five years the company has brought down its unit costs by 30%. That's taken it from $4.30 per Mcfe in 2008 all the way down to just $3.00 per Mcfe last year. That puts Range Resources among the lowest-cost natural gas producers in the country and one reason why the company can grow production and still make money. Take a look at the following chart and you'll see what I mean: 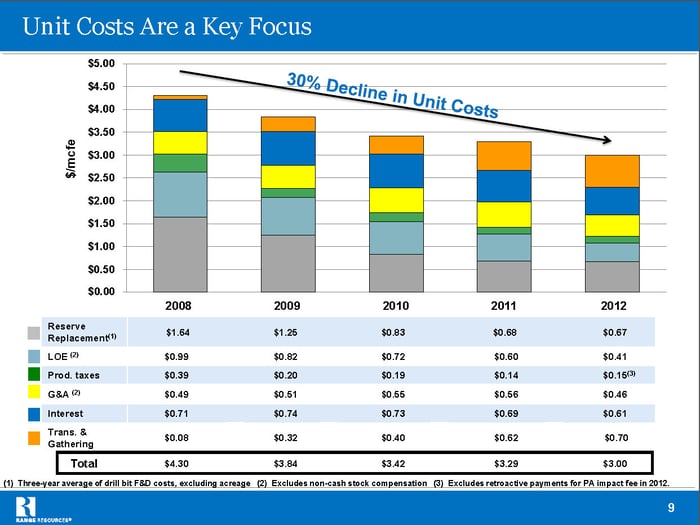 Overall the company ranks in the top five, though it's still well behind the top low-cost producers Southwestern Energy (SWN -1.16%) and EQT (EQT -1.60%). Both companies have enjoyed total cost of production of almost a dollar less per Mcfe; still, Range Resource's cost structure puts in in an elite group. That's served owners of its stock very well as it's up nearly 40% over the past year.

Final thoughts
With a focus on per-share growth and a low-cost structure, Range Resources can grow its natural gas production and profits when most others can't. While that's served stock investors well in a low price environment, the company can really outperform when natural gas heads higher. If you believe that's the most likely scenario, then Range Resources is one stock you'll want to buy.