Apple has long predicted that the tablet market will become larger than the PC market. IDC's most recent estimates show that day is getting a whole lot closer.

If investors still had any doubts that the PC is dead as the primary computing form factor, IDC's most recent estimates should silence any remaining skeptics. The figures came in dramatically below everyone's worst guesses, with global unit shipments falling by 14% in the first quarter to 76.3 million.

Microsoft (MSFT 0.03%) Windows 8 is largely to blame, as the new operating system isn't resonating with consumers. Revamping the entire interface was a bold risk for the software giant to take; one that was arguably necessary in an attempt to reinvigorate the sluggish PC market. That's mostly backfired, as IDC specifically blames Windows 8 for slowing down the market.

Here's the thing: Apple (AAPL -1.02%) saw it coming a long time ago. CEO Tim Cook has reiterated on numerous occasions that he expects the tablet market to soon become larger than the PC market. Growth in global tablet shipments has been nothing short of astounding over the past three years, thanks in part to their lower price points and broad appeal to casual users.

IDC has yet to release its estimates on tablet shipments in the first quarter, but the market researcher figured that there were a total of 52.5 million tablets shipped during the holiday quarter. 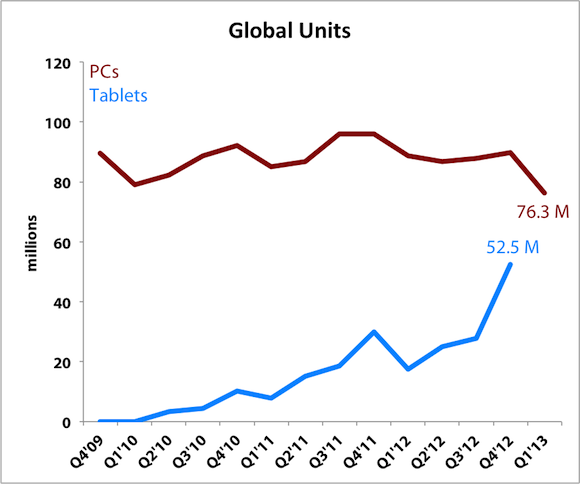 That means that the tablet market is within reach of overtaking the PC market. Tablet units should expectedly decline sequentially coming off the holiday shopping season, but it's entirely conceivable that tablets will overtake PCs over the next year or so at the rates that PCs are declining and tablets are growing.

Microsoft's attempt to blur the lines between tablets and PC with Surface isn't making much of a dent in the market. The company doesn't disclose Surface units, but IDC estimated that Microsoft shipped 900,000 units in the fourth quarter (IDC includes Surface as a tablet). Surface Pro launched in the first quarter, but its premium pricing and awkward strategic positioning probably won't translate into game-changing volume.

The day of tablet reckoning that Apple's been waiting for may still be a little ways off, but it just got a whole lot closer.