Thanks largely to the antics of former CEO Aubrey McClendon, Chesapeake Energy (CHKA.Q) has been one of the most maligned names in the energy sector. McClendon leveraged the company's future with debt, intertwined his personal finances with the company's, and engineered a land-buying program that received significant amounts of bad press topped off with negative portrayal of the industry in Matt Damon's movie, "Promised Land." The result has been a nearly 40% slide in Chesapeake Energy stock over the past two years. 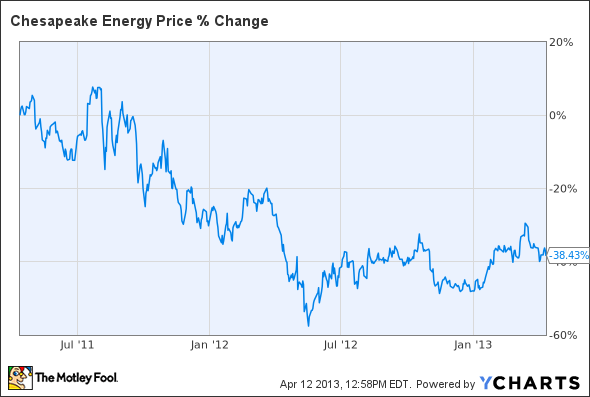 Natural gas on the rise
Despite the bad press, the overall position of the natural gas industry has never looked more promising. Companies ranging from Clean Energy Fuels (CLNE -1.80%) to Berkshire Hathaway (BRK.A 0.10%) are beginning to initiate programs that rely heavily on natural gas. In the case of Clean Energy, the company is undertaking a major push to create a corridor of liquefied natural gas, or LNG, filling stations across the country to allow trucks to carry freight on LNG power rather than diesel. This type of transition is likely to eventually trickle down to passenger vehicles, which currently are not fully viable as an LNG alternative. While Chesapeake Energy stock once benefited from the company's partial ownership of Clean Energy, that stake is likely to be sold to help meet debt obligations. 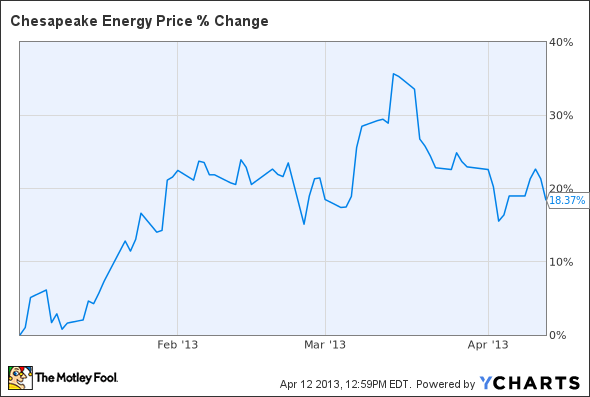 In the case of Berkshire, earlier this month the company's BNSF Railway Co. announced a pilot program to study the viability of running locomotives on LNG. While the cost of retrofitting the railroad's 6900 locomotives with LNG-burning engines would be significant, the cost savings would quickly eclipse the initial capital investment. Warren Buffett has extolled the virtues of making the change, noting that BNSF is the country's second-largest consumer of diesel, ranking only behind the U.S. Navy.

What's behind the LNG shift
The critical driver of the LNG push is the explosion in natural gas supply that has been created by hydraulic fracturing – known as fracking – operations across the country. While the supply glut has hurt Chesapeake Energy stock, driving down natural gas prices to levels of about one-fifth of what they are overseas, this supply is the impetus for the long-term appeal of switching to LNG as a primary fuel source. The U.S. Department of Energy reports that domestic reliance on foreign energy sources has fallen from a peak of 60% in 2006 to just 36% in 2012. As more U.S. supply comes on line, the growth potential for domestic operations is significant.

So how does this help you retire?
In the immediate term, natural gas prices have the potential to stay fairly low, which is not particularly favorable for Chesapeake Energy stock. Over the longer term, however, as more and more industries transition to LNG and reliance on LNG swells, companies in this space will be major beneficiaries. Chesapeake is the second-largest natural gas producer in the country. Its weak performance means that it can be added to your portfolio at an attractive price as long as you take a long-term view on it as an investment. With a dividend yield of 1.8%, the stock still provide a better income element that U.S. Treasuries, meaning that while you wait, there is some yield to be had. For each of these reasons, Chesapeake Energy stock looks like an attractive addition to your retirement portfolio.