Hewlett-Packard stock plummeted on Thursday, following the release of disappointing PC market data on Wednesday afternoon. But why?

Shares of Hewlett-Packard (HPQ -3.02%) were hit hard on Thursday, dropping more than 6%. The drop followed the release of discouraging data on the state of the PC market on Wednesday afternoon. While HP and Dell (DELL.DL) do face declining demand for PCs, the market still does not grasp the near-irrelevance of PC sales for HP's earnings. Investors should view HP's recent decline as an opportunity to buy if they missed out on the stock's recent rally. HP shares are still very cheap, trading at six times earnings, and CEO Meg Whitman's turnaround is already starting to produce "green shoots" -- particularly in the printing business.

The numbers
IDC's PC market report noted that the release of Microsoft's (MSFT -0.23%) new Windows 8 operating system appears to have hurt PC sales, unlike previous OS releases. Thus far, Windows 8 has been an even bigger flop than the poorly received Windows Vista. Since PCs were already in the process of being cannibalized by tablets, the result was a 13.9% year-over-year decline in worldwide PC sales last quarter. Gartner also painted a bleak picture of Q1 PC demand, although it estimated the decline at 11.2%. Both reports agreed that all regions suffered a decline in sales volumes.

IDC and Gartner also agree that HP saw an even steeper PC shipment decline than the rest of the market. According to IDC, HP's PC shipments dropped 23.7% from the prior year; Gartner estimated a 23.6% drop. HP's PC division (the Personal Systems Group) posted revenue of more than $35 billion last year, roughly 30% of the company total. From that perspective, the drop in PC sales seems very significant. However, due to the low profitability of building PCs today, the drop in PC sales will actually have a negligible impact on HP's earnings.

The (non) impact
PC sales still make up a substantial portion of HP's revenue, so a 24% drop in PC sales will have a noticeable effect on the top line. However, investors ought to be focusing on the earnings impact. Last quarter, while HP had a companywide operating margin of 8%, the PC business' operating margin was less than 3%. As a result, the Personal Systems Group represented only 9% of total segment earnings at HP. HP's PC profit actually dropped by more than 50% year-over-year in Q1, yet the company crushed earnings estimates in February, leading to a big rally for the stock. 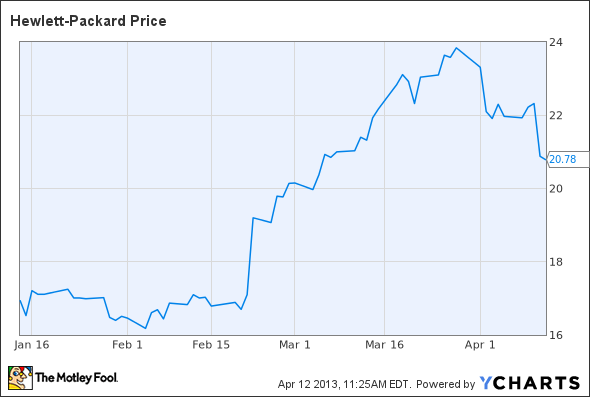 During HP's February conference call, CEO Meg Whitman and CFO Cathie Lesjak consistently stressed two points. First, the headwinds in the PC market have a minor impact on HP's overall profitability, because the business has very few fixed costs. In other words, a decline in sales does not necessarily hurt margins. Second, they stressed that they were committed to boosting PC margins going forward, in spite of heavy price competition in the market. At least one prominent tech analyst has concluded that HP increased prices last quarter, at the expense of market share. If that is the case, the steep decline in HP's PC unit sales could actually herald sequentially higher profits; a 1% sequential margin improvement would more than offset a 24% revenue decline.

Foolish conclusion
Mr. Market punished HP brutally for Wednesday's weak PC market data. Yet the PC business has become increasingly irrelevant to HP's success over the past few years, and now accounts for less than 10% of its earnings. The drop therefore seems like a major overreaction by Wall Street.  By contrast, Dell shares were unaffected by Wednesday's data because the company is in the process of going private. However, Dell is much more reliant on the PC market to drive overall company profitability than HP. If Dell's proposed buyout deals all fall through for whatever reason, Dell shares could be set up for a big drop.