When a stock's price rises without any fundamental change, it's time to run.

Last year may have been one of the worst ones ever for big-box retailers. Shares of Best Buy, RadioShack (RSHCQ), and hhgregg fell 50%, 78%, and 50%, respectively. It would make sense that this might be the case, as more and more people use these stores simply as venues to test out new products, then go home and order them for cheaper on Amazon.com.

Things were bad enough that last December, I told investors that RadioShack was the number one stock to avoid in 2013. So far, I've been wrong. The stock is up over 50%. Below, I'll explain why, and more importantly, why I still think you should stay away from the company's shares.

One big jump, all at once 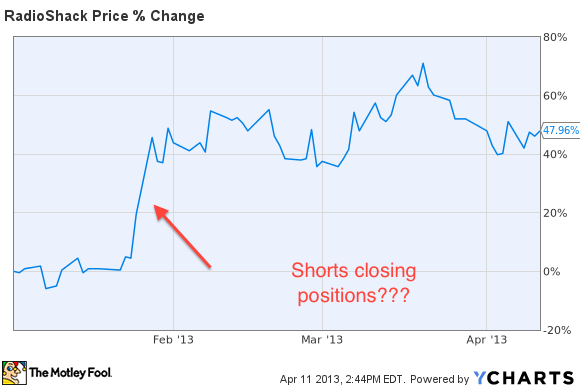 The lion's share of RadioShack's jump can be compacted into a five-day span where the company's stock advanced over 40%. But there was a problem with this jump: it was very difficult to tell what caused it.

Initially, it looked like it may have been simply the result of short-sellers closing out their bets against the company. It had, after all, fallen almost 80% in 2012. When lots of short-sellers close their positions, that's called a "short-squeeze" and it can rocket a company's shares for reasons completely disconnected from reality.

I have to wonder, given the timing of the jump, if someone had some inside information that wasn't let out. That's because that "inexplicable" jump occurred just before the company came out and finally named a new CEO, Joseph Magnacca.

Regardless of the jump, let's take a long-term view
The choice of Magnacca is an interesting one. Before RadioShack, he had been in charge of marketing and merchandising for Walgreen. Indeed, Magnacca has an impressive resume of turning around and optimizing drug stores -- especially in Canada.

The odd part, though, is that running drugstores is fundamentally different than running an electronics store that's being decimated by showrooming and cheaper prices available on e-commerce giant Amazon.

Magnacca will have to reverse a string of negative trends, which include a 2.7% drop in revenue over the past year, and the fact that the company is currently unprofitable. He has promised to come out with a 100-day turnaround plan sometime in April, but nothing has been made public yet.

Could things turn around?
While that plan could certainly rejuvenate the company, I'm not betting on it. RadioShack has very few competitive advantages that lend itself to an easy turnaround.

Amazon Could Be the Next Brick-and-Mortar Giant

3 Companies That May Not Last Through 2015

Why January 15 Could be Doomsday for RadioShack Corp.