Please ensure Javascript is enabled for purposes of website accessibility
Log In Help Join The Motley Fool
Free Article Join Over 1 Million Premium Members And Get More In-Depth Stock Guidance and Research
By Anders Bylund - Apr 14, 2013 at 8:45AM

What do 1.3 billion hours of monthly Netflix viewing really mean?

Netflix (NFLX 1.76%) CEO Reed Hastings got himself and his company into some trouble last summer. Hastings used his personal Facebook (FB 0.78%) page to reveal the fact that Netflix users spent 1 billion hours in front of streaming videos in June. Critics said this information was valuable to shareholders and would have been more appropriate in a more traditional medium such as a press release or an SEC filing.

The SEC took a look, decided to allow social-media postings to carry investable information -- and Hastings is back on Facebook again. This time, the news is that Netflix users streamed 4 billion video hours in the first quarter of 2013. Here's the whole posting: 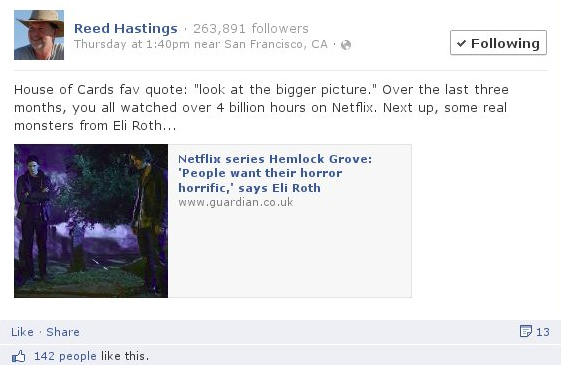 If the billion-hour tidbit was material to investors, this posting shouldn't be any less valuable. Converted into "more than 1.3 billion hours per month," it's at least a 33% increase in viewing hours on a global level compared with that market-moving note from last June.

So what do these billion-scale numbers really mean?

If viewer engagement has stayed constant over the past nine months, the figure would mean that Netflix grew its global subscriber base by more than 34%. That would be on the high end of Hastings' subscriber guidance for the first quarter, which gets a full report in less than two weeks.

Or, with subscriber counts at the midpoint of official guidance ranges, you'd get a 3% increase in monthly viewing per user. That would help Netflix suppress the dreaded churn of users getting bored and leaving the service.

The truth probably straddles both dynamics, with a heavier lean on high subscriber numbers than increased engagement. I do expect churn to get guided down a bit as the slate of original Netflix shows makes its presence known. House of Cards is a hit, Hemlock Grove hooks into a suddenly red-hot horror-movie market, and Arrested Development comes with a fully developed fan base. And most of their eyeball-grabbing action falls in the second quarter.

Keep your eyes open for more of Hastings' Facebook posts if the second-quarter report leaves you wanting more.