A third of all seaborne oil travels through the South China Sea, as well as more than half of global liquefied natural gas.

Regional geopolitical disputes are increasingly becoming international economic issues thanks to our global economy. At first glance, rising tensions in the South China Sea would appear to be no more than a fishing dispute. However, some see this situation as one surrounding supposed gas and oil reserves under the sea.

That, however, is in conflict with some reports that state that there are negligible reserves to be found in the disputed areas. Even if the potential energy reserves are what's behind the current squabble, it probably won't be something that's solved anytime soon. That could mean future flare-ups that affect the energy industry beyond the resources that may or may not be under the sea. So as China, Vietnam, and others debate the territorial rights of two certain islands in the region, let's look at how future incidents might have the potential to affect the global energy trade.

According to the Energy Information Administration, 15 million barrels of oil per day, or a third of all seaborne oil, traveled through this region in 2011. That puts it nearly on par with the higher-profile Strait of Hormuz, which is responsible for more than 17 million barrels per day. If this situation here were to boil over, it could have a significant impact on the flow of oil through the sea, given China's military might.

As important as the region is for the oil trade, it's also responsible for more than half of the global liquefied natural gas, or LNG, trade. With growing demand for natural gas in Asia, this dispute could become a big problem for LNG exports from places such as Africa and Australia, while putting exports from North America at a competitive advantage. Take a look at the following map, and I'll explain what I mean. 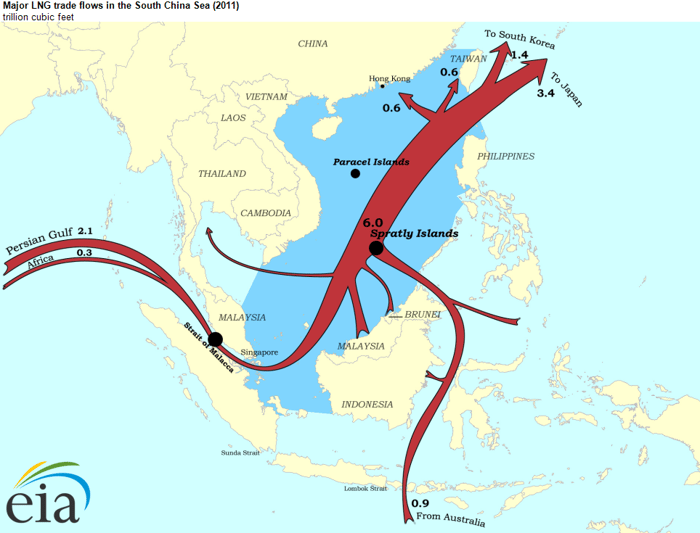 In 2011, Africa shipped 0.3 trillion cubic feet, or Tcf, per day, while while Australia shipped 0.9 Tcf. However, those numbers are probably headed much higher in the future. Energy companies are spending billions to develop new LNG export facilities designed to tap these highly profitable Asian markets.

For example, Anadarko Petroleum (ACP) recently joined forces with Eni on a major LNG export facility in Mozambique. The project is designed to support Anadarko's major natural gas find off the coast. The partners expect the project to begin exporting gas by 2018. While that's a long way off, geopolitical disputes tend to be recurring themes.

Moving over to Australia, ConocoPhillips (COP 1.55%) is moving forward on a major LNG export facility. The company expects to begin exporting in mid-2015. Chevron (CVX 0.60%) is working to complete its own LNG projects with its Gorgon project, a joint venture with ExxonMobil (XOM 0.19%) and Royal Dutch Shell (RDS.A) expected to come online in early 2015. Overall, a lot of gas will be flowing from Australia to Asia in the coming decades.

If China were to use its military might to shut down shipping lanes, it could conceivably crimp the profits at these facilities. While that's not a likely scenario, given that China needs access to gas, it is something to watch. The possibility does exist that the country could slow down trade or allow gas only to be shipped to mainland China.

That's where North American exports could play a role in getting gas to Japan and South Korea. Shell just filed plans to build a $4 billion pipeline and LNG export terminal in British Columbia. The project is a joint venture with Japan's Mitsubishi, Korea Gas, and PetroChina. This project is just one of many proposed facilities on the continent to ship cheap North American natural gas to the lucrative Asian export markets.

Overall, I think that tensions in the South China Sea aren't likely to amount to much more than an occasional dust-up, so this is unlikely to have much of an impact on the global oil and gas trade. China needs access to energy, which is why it's gone to great lengths to secure its access to energy-related technology and knowledge. Instead, this is something to simply keep on your radar, because if a geopolitical storm does hit the South China Sea, it could be North American exporters that come out ahead.