Can Amazon live up to lofty expectations?

You wouldn't know it by the stock's performance, but Amazon (AMZN 0.25%) has actually missed earnings estimates for three straight quarters. Investors have looked past the misses because the company is growing, but Amazon can only play the "investing in the future" card for so long before it'll have to prove it can make a profit. When the company reports first-quarter earnings on April 25, investors are only expecting a $0.09-per-share profit, and a miss of this low bar could send the stock crashing.

There are a few red flags for investors interested in Amazon, and soon we'll find out if those issues got worse in the first quarter or began improving.

The growth engine is slowing
One of the major challenges for Amazon is that growth is slowing. Normally, this is when investors would begin demanding profit to pick up, but thus far Amazon has gotten a pass. 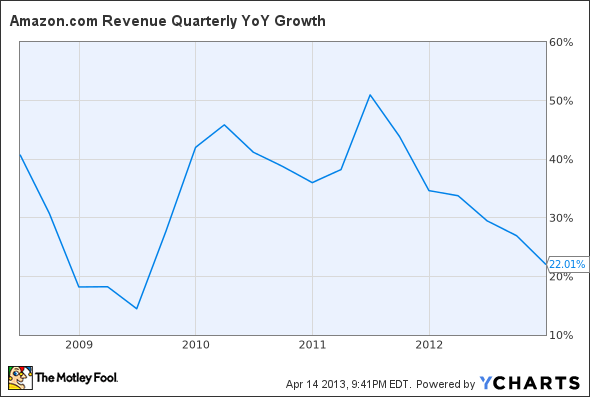 Revenue is only expected to grow between 14% and 26% in the first quarter, so there's a strong likelihood the decline in growth shown above will continue. Amazon is starting to fight the law of large numbers, finding it harder to find growth on a relative basis even if the numbers are strong on an absolute basis.

Can you make money giving away shipping?
I'm an Amazon Prime user and I love the service the company provides. But I love it because I can buy absurdly cheap items and get them shipped to me for a one-time annual fee that comes with other goodies like streaming video. It's this free shipping that has become an issue for Amazon.

To give you an idea why it's a concern, yesterday I bought an item for $5.66 and right now Amazon is shipping to me from Hong Konk -- for free! There's no way that purchase has a positive gross margin for Amazon, and it's just one example of why the company is barely profitable at its core business.

In 2012, fulfillment costs were 10.5% of sales, up from 9.5% in 2011. This general trend upward doesn't show any sign of stopping as it pushes customers toward a shipping-included model.

It'll be interesting to see where margins are trending this quarter and if shipping costs continue to eat up a growing portion of sales. Amazon is trying to fight the higher shipping costs with more distribution centers closer to customers. So far, that hasn't helped the numbers.

Low-margin businesses
The core problem I see for Amazon is that it competes in fundamentally low-margin businesses. Online retail, cloud computing, and streaming video have price pressure and cost pressure, which means razor-thin margins. In tablets, Amazon has said it will sell devices at no margin in the hopes of making money on the back end. This compares to a wildly profitable model for Apple, which makes money on devices and the back end.

Razor-thin margins are why Amazon is bouncing near breakeven on the bottom line and why its stock trades at absurd multiples. If Amazon can't prove that it can make a profit eventually, investors will give up on this highly valued stock. After all, how much would you pay for a company that doesn't make any money?

Lowered expectations
Despite the strong performance of Amazon stock, the expectations on Wall Street keep getting lower. 2013 earnings forecasts have fallen from $1.74 to $1.48 over the past three months. For 2014 the same number is down from $3.93 to $3.57. Eventually, falling estimates will come back and bite a company, and eventually, investors are going to need to see profit on Amazon's horizon.

When you compare Amazon stock to a company like Apple, it's hard to see the value. Apple has a 8.6 forward P/E ratio and pays investors a 2.5% yield, compared to a 76 forward P/E and no dividend for Amazon. That doesn't sound like a good deal to me.