Please ensure Javascript is enabled for purposes of website accessibility
Log In Help Join The Motley Fool
Free Article Join Over 1 Million Premium Members And Get More In-Depth Stock Guidance and Research
By Alex Dumortier, CFA - Apr 15, 2013 at 10:15AM

Gold is losing its luster
On the back of a challenging week during which it lost $60 per ounce, gold is reeling on Monday, down more 5%, having dipped below $1,400 intraday for the first time since March 2011. Gold is a highly volatile asset, and recent downward momentum could be nothing more than a spate of volatility in a long-term secular uptrend. Still, I think Societe Generale's research note of April 2, titled "The End of a Gold Era," looks increasingly prescient. The report included an end-of-year price target of $1,375, and that figure is now in sight. Ten days later, Goldman Sachs piled on with a year-end forecast of $1,450.

Bear in mind that the yellow metal was trading just below $1,600 at the publication of both reports. As the following chart for the SPDR Gold Shares ETF (GLD 0.07%) shows, gold has dramatically underperformed stocks so far this year: 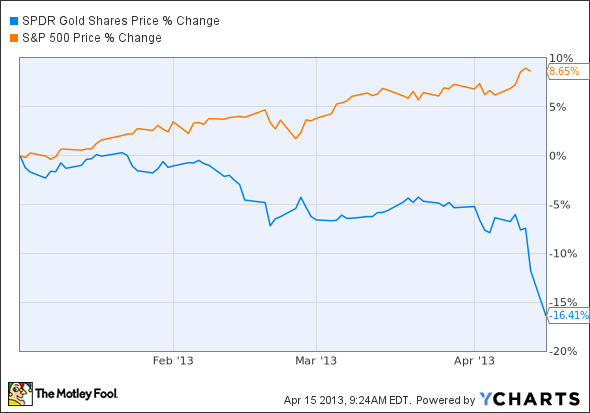 One of the reasons the metal is so volatile is that, relative to traditional asset markets (stocks and bonds), the gold market is a minnow, particularly when one considers the size of the "free float" -- the amount that is actually available for trading. This quality amplified bull-market moves when sentiment was on its side; if a bear market is underway, it will do the same on the downside. And there's plenty of potential downside left: Gold would need to decline by nearly half to achieve its inflation-adjusted average price since the price of gold floated in Aug. 1971.