Expectations about sales in the next six months move up.

Builder confidence is down for the third month in a row, according to April's National Association of Home Builders (NAHB)/Wells Fargo Housing Market Index (HMI) released today.

Amid concerns about the rising cost of building materials and a supply squeeze on lots and labor, the index fell two points to 42 for April. Analysts had expected a one point bump to 45.

December had marked eight consecutive months of increases in the gauge of builder confidence in the market for newly built single-family homes. It held steady in January at 47, but then begin ticking down. Any number under 50 indicates that more builders view conditions as poor than good. 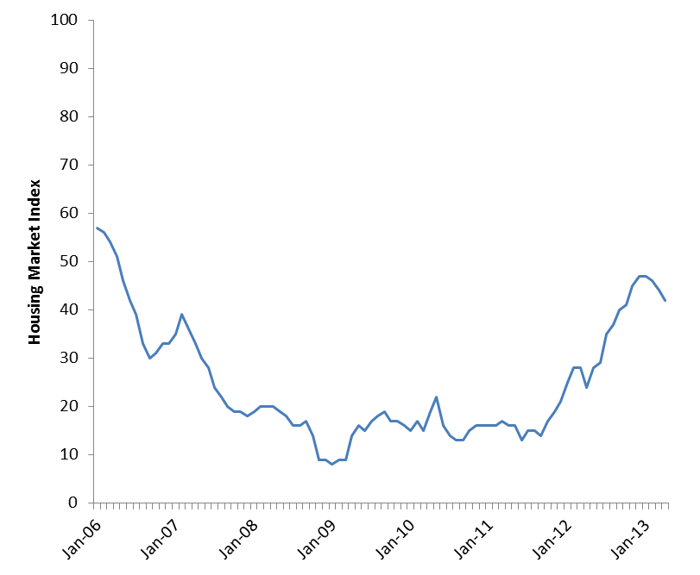 "Many builders are expressing frustration over being unable to respond to the rising demand for new homes due to difficulties in obtaining construction credit, overly restrictive mortgage lending rules and construction costs that are increasing at a faster pace than appraised values," said NAHB Chairman Rick Judson in today's press release. "While sales conditions are generally improving, these challenges are holding back new building and job creation."

On a regional level, the three-month moving average pulled down four points in the South to hit 42, while the West fell three points to 55. The Midwest declined two points to 42, while lagging Northeast remained unchanged at 38.

Looking ahead, sales expectations for the next six months offer a glimmer of hope for homebuilders. A three-point gain to 53 puts sales expectation at their highest level since February 2007. NAHB Chief Economist David Crowe attributes this boost to low inventories of for-sale homes, "rock bottom" mortgage rates, and increasing consumer confidence.