Let's see what the numbers say about Clearwire.

Investors love stocks that consistently beat the Street without getting ahead of their fundamentals and risking a meltdown. The best stocks offer sustainable market-beating gains, with robust and improving financial metrics that support strong price growth. Does Clearwire (NASDAQ: CLWR) fit the bill? Let's take a look at what its recent results tell us about its potential for future gains.

What we're looking for
The graphs you're about to see tell Clearwire's story, and we'll be grading the quality of that story in several ways:

What the numbers tell you
Now, let's take a look at Clearwire's key statistics: 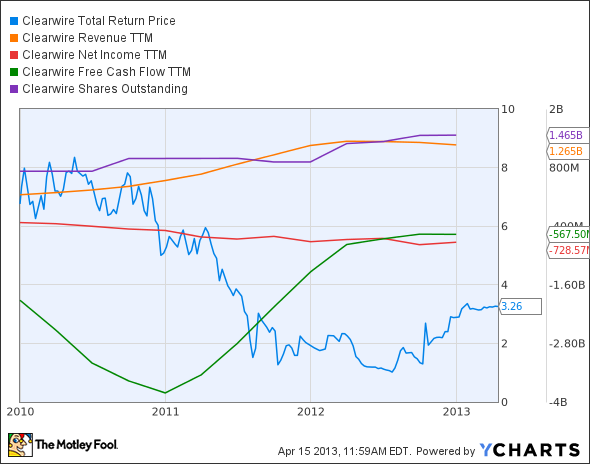 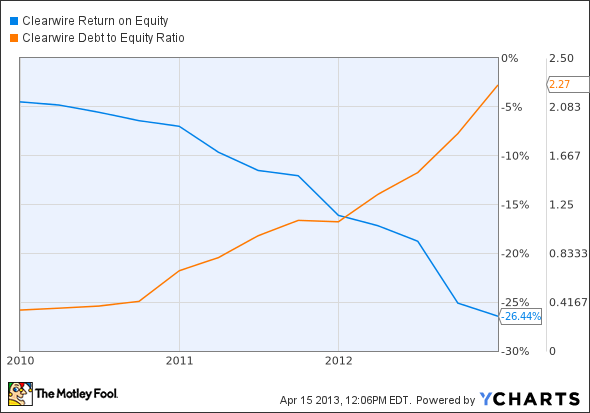 How we got here and where we're going
Clearwire appears to be heading in the right direction, with five out of seven passing grades -- but the debt-laden company undermines itself with the sheer rising bulk of its debt relative to everything else. This has been a long-term problem for Clearwire, and investors haven't seen much reason to get excited, in spite of movement from unprofitable to slightly less unprofitable. Will Clearwire ever reward investors with green ink? Let's dig a little deeper.

Today's big news is the proposed merger between DISH Network (DISH 1.36%) and Sprint (S), which has long been Clearwire's primary lifeline. As recently as last week, we saw some speculation that DISH might back away from the Sprint-Clearwire pairing in its quest for spectrum, only to be surprised this morning by a $25.5 billion merger proposal between the telecom and the TV services provider.

At the moment, Clearwire has a $3.30-per-share offer on the table from DISH, and let's face it -- Clearwire probably isn't going to get a better deal than that, given its massive debts and inability to turn a profit. Clearwire's hand may have been tipped with the DISH-Sprint offer, and we should probably expect a response in the near future.

If Clearwire rejects the buyout, who else will come to its rescue? The new company would already own a controlling interest (as Sprint currently holds 52% of Clearwire), discouraging other attempts to buy it out. Also standing in the way of greater shareholder returns is the revelation that a number of Clearwire executives stand to gain handsomely in the event of a Sprint buyout (offered on weak terms of $2.97 per share) -- and will gain regardless, but at a slower and less convenient rate. The insulting terms and evident corporate payoff by big daddy Sprint have caused a bit of a shareholder revolt. Where will that lead if and/or when DISH and Sprint become... DINT? Sprish? I'm sure they'll come up with a better name.

Clearwire can't afford to be left out in the cold, and Sprint has no reason to abandon its prime spectrum provider, but the battle between various shareholder camps is likely to heat up if this new merger approaches completion. Legal battles might even undermine heavily indebted Clearwire's ability to secure financing in the near future, which could be catastrophic. Clearwire shareholders had better hope that DISH is more interested in a fair deal than Sprint has been so far.

Putting the pieces together
Today, Clearwire has some of the qualities that make up a great stock, but no stock is truly perfect. Digging deeper can help you uncover the answers you need to make a great buy -- or to stay away from a stock that's going nowhere.