I've made no secret of my fondness for apparel specialist Under Armour (NYSE:UAA) over the past few years.

In fact, since I opened an outperform CAPScall on the stock at a split-adjusted $14.76 per share in January 2010, I've joyously watched it outperform the S&P 500 by more than 240% as of this writing. 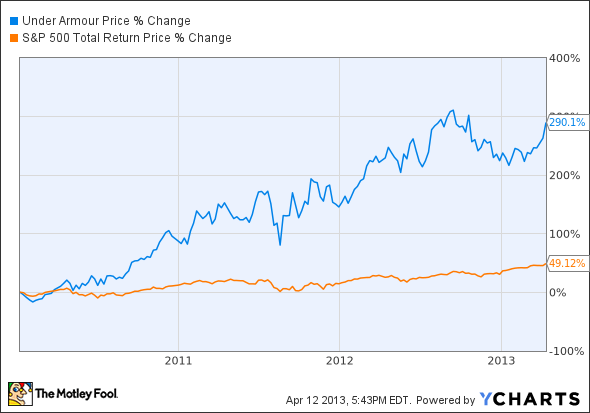 Luckily, I had the conviction at the time to put my money where my mouth is, so the investment has also afforded me similar returns in my real-life portfolio.

Even so, and despite the huge run-up, I decided last week to add even more to my real-life position in Under Armour.

Why now?
Don't get me wrong. In keeping with Foolish investment philosophies, I never buy a stock simply because it's gone up (or down, for that matter). After all, buying in an effort to catch that next exciting leg up can be a perfect recipe for disaster.

That said, truly great companies have a habit of setting new highs on a regular basis and, over the long-term, I expect Under Armour will prove one of those great companies. In fact, considering that The Motley Fool recently ranked Under Armour 10th in its list of the 25 best companies in America, it's safe to say many of my colleagues agree.

That's also one of the reasons I singled out Under Armour in February as one of three great stocks any investor could be happy to hold for the next 50 years. And yes, you read that right. Not five. Not 15.

A world of opportunity
Now I'm a relatively young fellow, but I should be a couple decades into retirement 50 years from now.

So what makes Under Armour so special? As I've noted before, Under Armour currently reigns in the performance apparel market it created, and the segment was still responsible for 76% of its $1.83 billion in 2012 sales. As a result, Under Armour is intelligently working to seize opportunities to diversify by branching out from its roots.

For one thing, Under Armour is aggressively expanding its presence in the athletic footwear market, for which the company saw its revenue increase 43% year over year in 2012 to $45 million. Rest assured, however, that Under Armour still has more than enough room to grow; according to recent research, the athletic footwear market is expected to reach nearly $85 billion globally by 2018 from $74 billion in 2011.

The catch? Footwear is obviously a crowded market, and behemoth competitors like Adidas (OTC:ADDYY) and Nike (NYSE:NKE) have a lot to lose to bold up-and-comers like Under Armour. Heck, Under Armour even had to sue Nike recently after the larger company went so far as to release ad campaigns that appeared to blatantly copy some of UA's trademarked phrases.

If that weren't enough, consider that Under Armour has achieved nearly all this growth while its international revenue still only accounted for just 7% of total sales last quarter. When Under Armour starts focusing more on international growth, then, it's safe to say it should have little trouble maintaining its stated goals of at least 20% sales growth for the foreseeable future.

Foolish final thoughts
And that, my fellow Fools, is why I'm not particularly concerned about whether the last few years' meteoric rise in Under Armour's stock is sustainable. A few decades from now, I'm convinced investors will look back and wonder why they didn't buy Under Armour when it was just getting started.