Please ensure Javascript is enabled for purposes of website accessibility
Log In Help Join The Motley Fool
Free Article Join Over 1 Million Premium Members And Get More In-Depth Stock Guidance and Research
By Keith Speights - Apr 16, 2013 at 9:48AM

These biotech stocks are soaring now, but can NPS Pharmaceuticals and Regeneron keep up the momentum?

What goes up must come down. Or can it just keep going up? 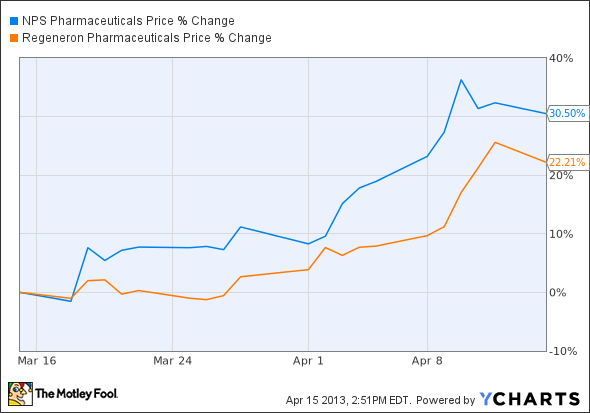 Is gravity waiting to kick in for NPS and Regeneron, or can their momentum continue? Let's take a look.

How they got here
NPS received good news in December when the Food and Drug Administration approved Gattex for treatment of short bowel syndrome, or SBS. However, the stock didn't take off. Instead, shares actually drifted downward for much of the next two months.

Things began to change shortly after NPS provided an update on the Gattex launch in late February. The real catalyst, though, came on March 19 when the company announced that it was regaining full worldwide rights for Gattex (known in Europe as Revestive) and Preotact for $50 million in stock.

Regeneron blew the doors off in 2012 with shares soaring more than 200%. That rise came largely on the strength of Eylea, the company's wet age-related macular degeneration drug.

However, 2013 began with a thud. Regeneron's stock declined after solid but disappointing Eylea sales results in the fourth quarter. With the company providing positive guidance for 2013, investors shook off their disappointment by late February, and Regeneron began its nice rebound.

Can the climbs continue?
NPS Pharmaceuticals' shares appear to have considerable room to run. Peak annual sales for Gattex are estimated at around $350 million. The current stock price values the company at just over $1 billion -- less than three times peak sales for just this one drug.

However, NPS also has other revenue sources. The company will continue to receive money from its licensing of Sensipar/Mimpara to Amgen (AMGN 0.87%) through 2018. Last year, Amgen paid NPS $25 million for royalty rights after Dec. 31, 2018.

Another promising product that could prove to be a winner for NPS is Natpara, a hormone replacement therapy for hypoparathyroidism. It is a rare disease that impacts 80,000 to 100,000 Americans. NPS thinks that annual sales for Natpara could reach $250 million.

Regeneron's current market cap is $20 billion. That's more than 18 times the original estimates for peak Eylea sales. However, those initial estimates assumed Eylea would hit $1.1 billion in sales in 2021. Regeneron is forecasting higher sales than that in just 2013. While the torrid pace of growth will inevitably slow at some point, it wouldn't be surprising to see Eylea surpass Lucentis and reach sales of more than $1.5 billion annually.

Eylea isn't the only feather in Regeneron's cap, though. The company partnered with Sanofi (SNY -0.63%) on colorectal cancer drug Zaltrap, which gained FDA approval last August. While sales were sluggish initially, a steep price cut for the drug to make it more competitive should help.

Another collaboration with Sanofi holds longer term promise for Regeneron. In November, the two companies announced enrollment in a late-stage study of an antibody that targets lowering "bad" cholesterol. Should this study prove successful, Regeneron will have a rich new source of revenue in the next few years.

While NPS Pharmaceuticals and Regeneron have taken off in the past month, both stocks should be able to keep the momentum going for a while. However, any bumps in the road for Gattex or Eylea this year will demonstrate how applicable the theory of gravity is to the stock market. What goes up will come down -- sooner or later.

Editor's note: A previous version of this article reported the peak annual sales estimate for Gattex at $750 million. The Fool regrets the error.