Historically high long-term unemployment might have created an unemployable class.

This might be the worst economy yet in which to find a job. Sure, the S&P 500 (^GSPC -0.58%) has reached historic highs and has more than doubled since the depths of the market in 2009. The overall index has combined earnings of $87 per share, close to its 2007 high of $94. But the market's recovery doesn't mean much for the overall economy.

Weeks to months
Take a look at the median duration of unemployment: 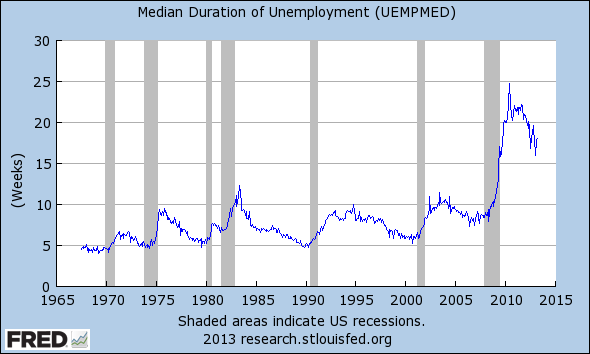 The median time that it takes to find a job has only recently begun to decline after reaching historic levels, and it still remains remarkably high. Scarier than the median duration of about 4.5 months, the average duration adds up to more than nine months of unemployment. This is troubling for this group, because the longer one is unemployed, the less chance one has of finding a new job -- but exactly how much less of a chance?

If no one wants you, we don't want you
In a study The Atlantic highlights, a Northeastern professor found out just how much a gap in employment can hurt your chances of finding a new job. By sending out thousands of resumes and measuring the rate of callbacks, the study found that even when applying for a position that matches their experience, those unemployed longer than six months had a callback rate of about 3%. An applicant with a shorter duration of unemployment had a callback rate of more than 16%.

Social proof
As humans, we use social cues to make decisions. If another company has recently vetted you, it's much easier for a potential employer to accept that you are employable. As that interim period drags on, however, hiring managers will wonder why no one else has given you a chance.

There are a few solutions, but they aren't applicable to all situations. If you're long-term unemployed, you could return to school and learn new skills, although this costs money and is more difficult for those who are older and unemployed. You could also start your own business, but not every occupation allows such a venture.

In the end, an employer will want the long-term unemployed to demonstrate that they were productive during employment gaps. But even this may not be enough to land a job, especially with weak demand hurting job creation. There is a chance that many in this group may never be assimilated back into the labor market.