Does recent strong housing data suggest boom times are ahead?

According to data just released by the Department of Commerce, construction of new homes is now at its highest rate in almost five years. The report noted that starts in March were up an astounding 47% over the same period last year. That's the largest year-over-year growth since 1992.

Overall housing starts rose 7% from February to a seasonally adjusted annual rate of 1.04 million. That's the highest annual rate since 2008. It's also a lot higher than the 933,000 starts that economists were expecting. Further, the government revised February's housing start rate up from 917,000 to 968,000. From all appearances, housing appears to be on the cusp of booming again.

Even anecdotally we're beginning to see a quickened pace in the housing market. My wife and I put our house on the market late last month and in less than three weeks we were offered full price for our home. While all real estate is local, even local trends are affected by the national picture. So as those trends have indicated a gradual recovery in housing, the overall pace of activity appears to be picking up.

I will point out that there are a couple of notes of caution in the report. Building permits, which are a sign of future demand fell by 3.9% in March to a rate of 902,000. Further, the biggest driver in the housing report is building starts for apartments. Starts for buildings with at least five units rose 27% from February to the highest rate since 2006.

There still is a bit of a sour taste when it comes to housing, meaning apartments are a better option for some than living with mom and dad. This trend has been a key driver in the performance of apartment REIT's like Equity Residential (EQR 0.03%) over the past few years. The company currently has 2,400 apartment units under construction with another 4,200 units still to be developed. As you can see in the following chart, demand for apartments is outstripping supply which is causing low projected vacancies: 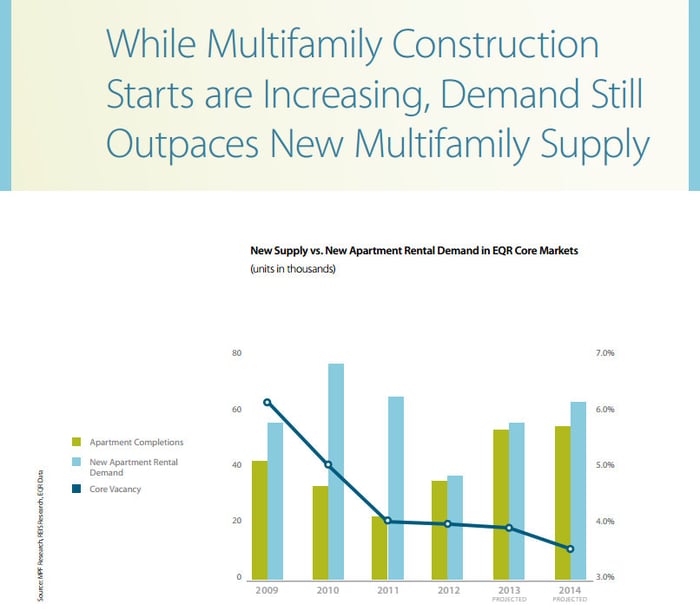 However, according to a recent survey from PulteGroup (PHM 4.98%) the millennials (those aged 18-34) who make up the core rental market, don't plan on being lifelong renters. In fact, the survey indicated that 65% of those with incomes of $50,000 or greater have an increased intention to buy a home than they had last year.

That likely means we will need to build more homes as we still remain below the long-term equilibrium line of 1.6 million starts. Despite that, homebuilder profits have been exceptional of late as builders are seeing an increase in both the price and the size of homes. So, even as starts remain below the equilibrium number, it's still profitable to build a home.

This trend has boosted the bottom line of homebuilders like D.R. Horton (DHI 5.13%). Last quarter the company saw its income jump 139% from the previous year. While sales were up 39% in the quarter the big driver in profits was the fact the company sold larger homes which increased the dollar value of the homes it sold. With housing data being very positive since that report, the company's next earnings release on April 26 could be even better.

While the housing market is much healthier than it had been, it's not booming yet. Though, that's not exactly a bad thing given how the last boom ended. Instead, we're seeing a steadily increasing market which is leading to solid gains across the board.

That's meant steady growth for top residential mortgage originator Wells Fargo. Last year the company saw revenue grow 6% on 4% loan growth, both of which helped to drive profits 19% higher. That growth, when combined with the bank's solid balance sheet, has enabled it to reward investors by increasing the dividend and buying back more shares.

The strength in housing activity has also enabled timberland owner and wood manufacturer Weyerhaeuser (WY 2.50%) to increase its dividend by 18%. CEO Dan Fulton noted that "stronger market fundamentals" were one of the driving forces behind the increase. It seems that everywhere you look positive signs in housing are pointing to an even brighter future.

So, while housing might not be booming per se, it has gotten a whole lot better. That's really good news at a time in which we're faced with a barrage of news we'd rather forget.