Please ensure Javascript is enabled for purposes of website accessibility
Log In Help Join The Motley Fool
Free Article Join Over 1 Million Premium Members And Get More In-Depth Stock Guidance and Research
By Alex Dumortier, CFA - Apr 18, 2013 at 10:15AM

The investments are going their separate ways.

Moving in separate directions
Even before this week's stock market gyrations, which were kicked off by a sharp decline on Monday, many investors and pundits had been loudly calling for a correction. Indeed, the market's rally since last year's June low has been a dogged, low-volatility climb that appeared to break from the "risk-on/risk-off" dynamic that has governed asset markets in the aftermath of the financial crisis, despite the fact that many of the same macroeconomic headwinds remain.

One ominous sign for stocks can be found not in the stock market, but in bonds, with Treasury bonds in particular finding new favor with investors since early March. Bill Gross, who manages PIMCO's Total Return Fund, the world's largest bond fund, has lifted its allocation to U.S. Treasuries to 33% against 28% in February -- the highest it has been since July. The decline in yields suggests that the risk of deflation, or at least a slowdown in the economy, has increased.

As the following graph shows, bonds' new-found popularity shows up in a split between the charts of the 10-year Treasury yield and the S&P 500's level over the past month (as bond prices increase, yields decline): 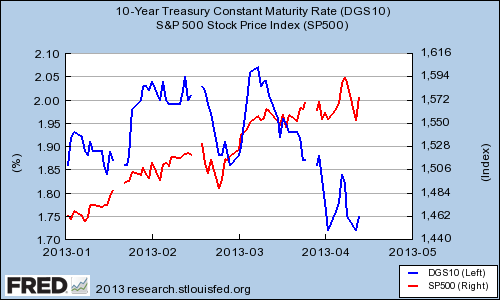 Note that a drop in yields (blue line) has accompanied the stock market wobbles in mid-2011 and during the second quarter of 2013:

While I'm not convinced that a stock market correction is imminent, I do think this week is a healthy reminder that stock prices do not move only in one direction. Volatility had been remarkably muted over the past several months, and investors need to accept that this is unlikely to be the status quo on an ongoing basis.