The e-tailer can't please an optimistic Wall Street this quarter.

The great e-commerce hope has fallen on its face today. eBay (EBAY -0.69%) is 5.5% lower after a first-quarter report showed solid growth that just wasn't solid enough. Is the reaction deserved, or is Amazon's (AMZN 0.25%) greatest rival getting unfairly punished today? Let's dig into the details.

eBay by the numbers
Both eBay's top and bottom lines showed double-digit gains from the year-ago quarter. Sales were up 14% to $3.75 billion, and adjusted earnings per share of $0.63 came in 14.5% ahead of 2012's first quarter and a penny above analyst forecasts. However, analysts had expected $3.765 billion in sales, and the letdown has more than offset the earnings beat. Here's how the company's latest quarter stacks up against its recent history: 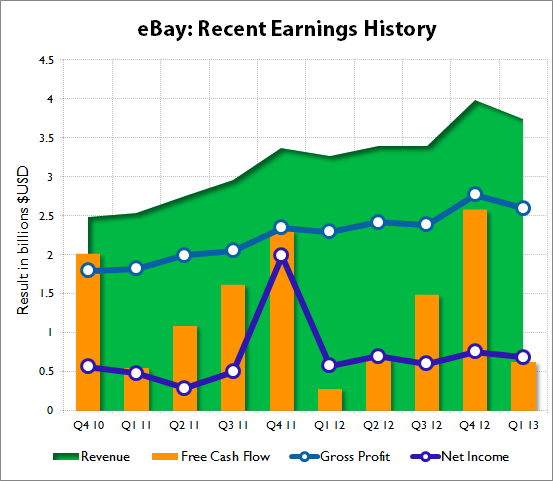 The one-time earnings spike notwithstanding, this quarter continues a general trend of first-quarter sequential declines from strong holiday quarters, while maintaining an overall upward trajectory. Part of the reason for today's decline stems from what some analysts have called "light" guidance for the second quarter -- $3.8 billion to $3.9 billion in sales resulting in $0.61 to $0.63 in EPS. This guidance, it's said, now puts eBay under more pressure during its 2013 holiday season to meet full-year guidance of $16 billion to $16.5 billion in sales and $2.70 to $2.75 in EPS.

However, it's worth noting that 2012's holiday quarter posted 18% year-over-year sales growth, and net income ex-items more than doubled from 2011's holiday quarter to 2012's. eBay has put up strong holiday sales before, and it should be able to do so again so long as it continues to execute on its mobile strategy and expand its PayPal network.

What to expect going forward
eBay sounded the familiar refrain of so many companies that have missed their estimates: "Europe's dragging us down!" If Europe is everyone's problem, then it stands to reason that the market will ultimately respond in a broad way to European weakness, either by ignoring it or by turning south, as it has in recent days. More pertinent to investors is eBay's growth everywhere else. In that regard, the company has not been growing quite so quickly as some hopeful analysts think: Although year-over-year sales gains were in the double digits for eBay's international segment last year, the company also saw larger growth in its domestic segment. That can't continue over the long term if eBay is really to become the global e-commerce juggernaut investors want to see, particularly because Amazon has beaten eBay's growth, segment for segment, for the past three years.

Several analysts took more moderate stances on eBay as a result of this report, but few are willing to jump ship just yet. JMP Securities lowered its EPS estimate but maintained an outperform rating regardless. JPMorgan analyst Doug Anmuth lowered his price target to $63 per share, a dollar lower than his earlier projection, but this is still 18% higher than the current price. Macquarie Equities Research's Ben Schachter was the lone analyst to lower his rating, now calling eBay a hold rather than a buy. On the other hand, Canaccord and RBC Capital Markets held firm on their earlier price targets.

Is today a buying opportunity, the start of a major blowback, or simply a transition from strong share-price growth to a period of more modest (or no) gains? eBay still has momentum behind it, but much can change in the global economy between now and the 2013 holiday season.

Why Apple, Glu Mobile, and eBay are Outperforming the Market
U.S. Econ News Boosts Dow to First Record High of 2014