The Europeans appear to be muddling through on Greece (for now), Chinese authorities have stanched the hemorrhage in their stock market (for now) and Fed Chair Yellen has delivered a positive top-down outlook for the U.S. economy -- that's enough for traders to focus squarely on corporate earnings. The Dow Jones Industrial Average (DJINDICES:^DJI) and the broader S&P 500 (SNPINDEX:^GSPC) are up 0.24% and 0.74%, respectively, at 12:30 p.m. EDT on Thursday. But it's the technology-heavy Nasdaq Composite that is shining today, up 1.05%.

Today's outperformance by the Nasdaq index is emblematic of 2015: 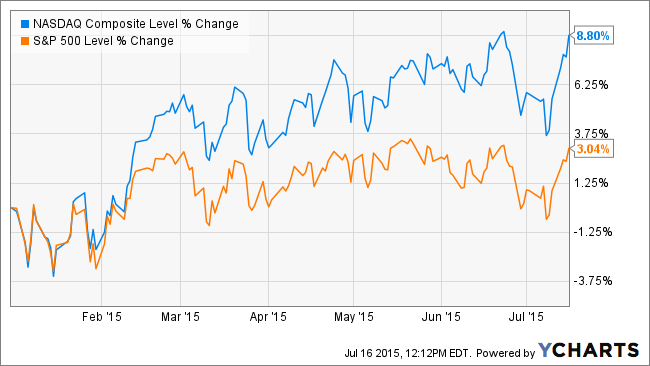 In an era of middling economic growth and low benchmark yields (thus, lower discount rates), investors are willing to pay up for the shares of companies that deliver (or promise) above-normal earnings growth. The Nasdaq Composite Index now trades at 31.2 trailing against twelve-month earnings against 18.7 for the S&P 500, the widest spread so far this year, according to data from Bloomberg.

On that basis, the Nasdaq may appear expensive. However, all other things equal, that spread is set to narrow significantly as Nasdaq's 2015 earnings-per-share are expected to grow 39% to $229.53 relative to trailing twelve-month earnings. Over the same period,  the consensus estimate has S&P 500 earnings-per-share inching ahead by just 4%.

This week, I highlighted two long-term growth stories: Netflix (NASDAQ:NFLX) and PayPal Holdings Inc. (NASDAQ: PYPLV), which is set to be spun off from eBay Inc. (NASDAQ:EBAY). (PayPal shares will begin regular trading next Monday.) Since I wrote the articles, both companies reported quarterly results that have impressed, vindicating the market's hunger for growth.

Shares of Netflix were up as much as 15% this morning, reaching a new all-time high, following the release of its second-quarter results after yesterday's market close. Yes, the streaming television and movie provider beat the consensus estimate by a penny, but with quarterly earnings of $0.06 against a share price in excess of $100, that is incidental to the company's value.

Instead, investors had their eye on the increase in the subscriber count: at 3.3 million, it exceeded expectations for the third consecutive quarter. Those subscribers represent a stream of additional revenues and a lever for long-term value creation, as they raise the company's operating leverage. Following Goldman Sach's example from Monday, 23 analysts raised their price target for Netflix, which is the best-performing stock in the S&P 500 this year, having more than doubled.

Meanwhile, eBay split out results for PayPal in announcing its second-quarter earnings this morning. The online payment company recorded a 16% year-on-year increase in revenues, to $2.3 billion (+19% on a currency-neutral basis), with 20% growth in total payments volume (+28%, currency-netural.) PayPal also reiterated its guidance for 2015 revenue growth, operating margin, and free cash flow. In response, PayPal's shares, which are currently trading on a when-issued basis, gained as much as 6.6% today.

Finally, in an article about growth investing, I ought to mention the granddaddy of disrupters and long-term value creators, Amazon.com (NASDAQ:AMZN), which turns 20 this month. Shares of the heavyweight e-tailer are up nearly 2% today, bringing them just below Tuesday's all-time high. With a market capitalization now approaching $220 billion, Amazon shows these new growth darlings that there is still something to shoot for. Well-managed disrupters in a growth segment can have real longevity -- that's the bet Netflix and PayPal investors are now making.