Please ensure Javascript is enabled for purposes of website accessibility
Log In Help Join The Motley Fool
Free Article Join Over 1 Million Premium Members And Get More In-Depth Stock Guidance and Research
By Alex Planes - Apr 18, 2013 at 11:05AM

Let's see what the numbers say about OmniVision Technologies.

Investors love stocks that consistently beat the Street without getting ahead of their fundamentals and risking a meltdown. The best stocks offer sustainable market-beating gains, with robust and improving financial metrics that support strong price growth. Does OmniVision Technologies (NASDAQ: OVTI) fit the bill? Let's take a look at what its recent results tell us about its potential for future gains.

What we're looking for
The graphs you're about to see tell OmniVision's story, and we'll be grading the quality of that story in several ways:

What the numbers tell you
Now, let's take a look at OmniVision's key statistics: 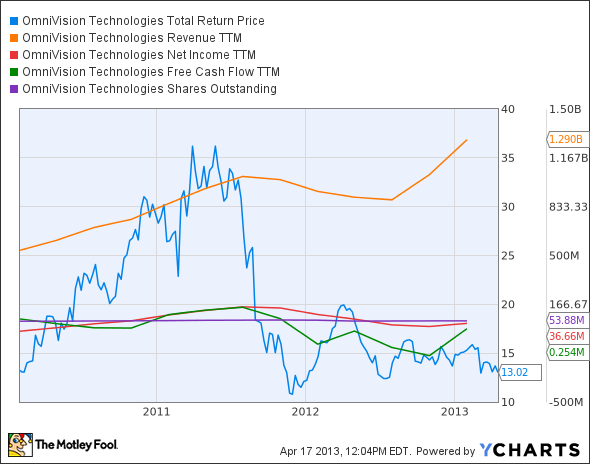 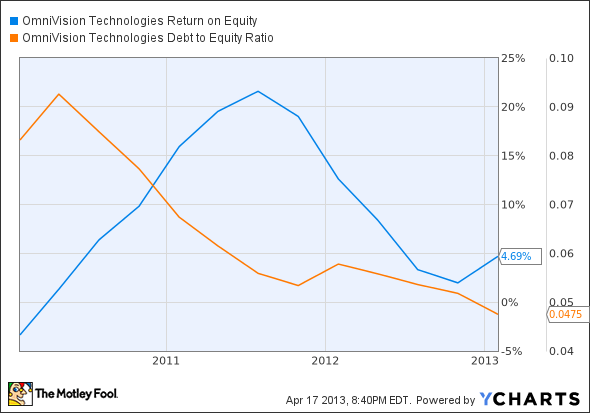 How we got here and where we're going
In spite of its share-price weakness, OmniVision has made nearly all the right moves over the past three years, earning six out of seven possible passing grades in the process. The vastly reduced free cash flow level should be of some concern, but OmniVision is currently clinging to a barely positive level of free cash flow, and as its debts have declined significantly, this shouldn't be a major concern. What is of greater concern is whether OmniVision can make progress in an extremely competitive market. Let's see how the company might succeed, and what might trip it up.

Let's start with what's tripping up OmniVision lately: expectations. The company can't get by with first-quarter guidance that looks just good enough at best, especially not after blowing Wall Street away so impressively in the holiday quarter. Although OmniVision has diversified away from Apple (AAPL -0.45%), it hasn't diversified quite enough. OmniVision holds about half of the tablet image sensor market, which lines up very well with Apple's share of the tablet market (estimated at 51% in 2012 and projected to drop to 46% in 2013, according to IDC).

This is going to be less important to OmniVision than the smartphone market, where it's going to have a more uphill battle against Samsung and other suppliers -- Samsung, of course, being the world's largest smartphone maker in its own right. A major reason for the company's huge share-price plunge over the last two years is uncertainty surrounding its placement in Apple's iPhones. Now another source of uncertainty is the limits of Apple's market potential in a mature and increasingly commoditized smartphone market. Fellow Apple supplier Cirrus Logic (CRUS -0.03%), which is almost entirely an Apple play, has also seen its share price sink right along with the iPhone maker's, showing the obvious risks of investing in what's essentially a leveraged Apple play: 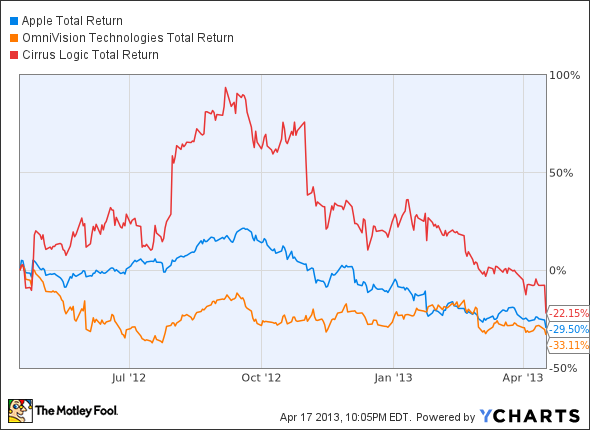 OmniVision needs more Apple growth to keep its score (and its fundamentals) moving in the right direction. It's unlikely to get big orders from Samsung, and there's no second-tier mobile maker that looks ready to break into the big leagues with OmniVision riding its coattails. The company looks good now, but the next few weeks will be very telling. If Apple underwhelms Wall Street, it's likely to drag OmniVision and other dependent suppliers down with it.

Putting the pieces together
Today, OmniVision has many of the qualities that make up a great stock, but no stock is truly perfect. Digging deeper can help you uncover the answers you need to make a great buy -- or to stay away from a stock that's going nowhere.