The regional gaming market continues to be in a funk, following trends in the rest of the economy. Penn National's (PENN 2.95%) first-quarter earnings show progress in some areas and a maddeningly slow recovery in others.

Regional gaming fights for limited dollars
The challenge of growing revenue organically in regional gaming isn't felt by Penn alone. For Caesars Entertainment (CZR), a recovery in Las Vegas has been masked by weakness in regional markets, where it still generates a majority of its revenue. Pinnacle Entertainment (NYSE: PNK) and Boyd Gaming (BYD 4.29%) are also fighting competition, and in Boyd's case, a rapidly declining market in Atlantic City. Over the past year, overall growth has been anemic at these companies. 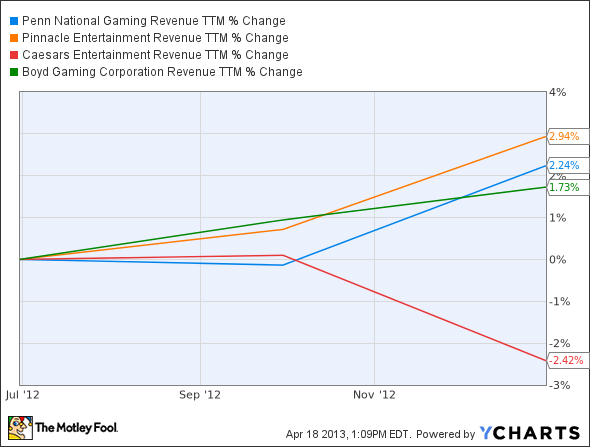 Instead of seeing the chart above as a sign that growth and returns may not be strong in regional gaming, companies have doubled down. Pinnacle is acquiring Ameristar Casinos,  Penn, as I mentioned above, is planning a the resort near San Diego and expanding in St. Louis, and Wynn Resorts (WYNN 0.97%) and Caesars are fighting over a new license in Boston. For Wynn, this is an effort to expand the brand in a high-profile city, but Caesars has enough trouble with debt and declining revenue in other regional markets. When will the growth of gaming stop?

Nearly every company has plans to expand in one way or another, even as gaming dollars are stretched thin. For investors, this means that return on investment isn't as high, which can be seen in Penn's results today. Higher revenue couldn't mask higher costs, and net income fell, reducing return on investment. Still, the company's plan to spin off a REIT to own its real estate assets should unlock some value, and investors are projected to walk away with a $2.44 dividend. I'm clearly cautious about the regional gaming market, but it's these moves that make Penn National the best breed in this very competitive market.