Dell shares fell on Friday after Blackstone announced that it was pulling out of the bidding for the company. With the bidding war for Dell winding down, shareholders don't have much reason to stick around.

On Thursday evening, The Wall Street Journal reported that private-equity shop Blackstone Group (BX) had pulled out of the running to buy Dell (DELL.DL). According to reports, Blackstone was concerned about falling PC industry sales and declines in Dell's operating income. Not surprisingly, the news led to a sell-off in Dell shares on Friday morning, with the stock dropping as low as $13.40, after having climbed as high as $14.50 just last month. 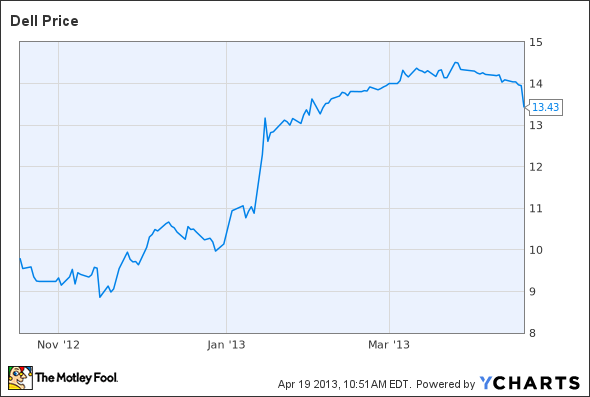 Blackstone's $14.25 preliminary offer to buy a controlling stake in Dell was considered the most serious alternative to founder Michael Dell's recent bid to take the company private (with help from Silver Lake Partners). A variety of major shareholders have vocally opposed Dell's bid, saying that his $13.65 offer price is too low. However, with no credible alternatives -- barring a long-shot bid from Carl Icahn -- the best-case scenario for shareholders now is getting $13.65 from Michael Dell and Silver Lake. If that deal falls through due to opposition from major holders like Southeastern Asset Management and T. Rowe Price, Dell shares could be headed lower again.

The problem
Dell's problem is relatively simple. While Michael Dell has tried to move the company's focus to growth areas like enterprise hardware, software, and services, a substantial portion of the company's revenue and profit is still tied to the PC business. Unfortunately, the PC business is a terrible place to be right now. According to IDC, the launch of Microsoft's (MSFT 3.20%) new Windows 8 OS led to the biggest drop in PC sales on record last quarter. Dell's PC unit shipments were down 10.9%, and the industry as a whole was down 13.9%. Consumers appear to be confused by the major changes to the Windows user interface, thus magnifying the cannibalization effect of tablets.

Unfortunately, the long-term outlook is no better. In a proxy statement filed late last month, Dell revealed that the investments necessary to compete in the enterprise segment with other tech heavyweights like Hewlett-Packard (HPQ 1.18%) and IBM (IBM 2.09%) would weigh on profitability for a long time. Moreover, a study by Boston Consulting Group commissioned by Dell found that the company's PC revenue could decline by a whopping $10 billion in the next four years.

The worst thing for Dell is that there is no guarantee that its moves toward diversification will be successful. HP and IBM have been serving the enterprise market for decades, and it could be very hard to convince customers to switch to Dell. In short, Dell's turnaround plan is a costly gamble that could easily backfire. I think that explains why Dell and Silver Lake have not increased their offer price beyond $13.65, and it also explains why Blackstone has dropped out of the bidding.

Foolish conclusion
At this point, it looks increasingly unlikely that a bidder will be able to top the Dell/Silver Lake buyout offer of $13.65 per share for Dell. Given that the stock is trading very close to that level, and that there is potentially significant downside if the deal falls through for any reason, the risks seem to outweigh the rewards for holding on to Dell. It's probably still a good idea for shareholders to follow the advice once dispensed by rock icon Steve Miller: "Go on, take the money and run."

Is BlackBerry the New Dell?
The Future of Dell?
Dell Shareholders Approve Michael Dell's $24.9 Billion Offer
Is Apple the New Netflix or the Next Dell?
Icahn Gives Up His Bid for Dell