Investors are worried that the da Vinci might not be all its made out to be. Right now they may be right, but will they be in the future?

Shareholders of Intuitive Surgical (ISRG 2.57%), maker of the da Vinci Robotic Surgical System, have endured a perplexing couple of months.

First, several members of the medical community began questioning whether the company's machine was necessarily helping hysterectomy patients. Then yesterday, the company came out with earnings that well exceeded expectations, only to see the stock dive further today.

The results
It's never good to live and die by expectations; but Intuitive clearly brought in and made more money last quarter than many were expecting.

The business itself is divided into three divisions. The first, Instruments, is responsible for selling disposable parts that a hospital must buy in order to perform certain surgeries. The second, Systems, is the one actually selling the da Vinci robots to hospitals. The third, much smaller division is Service, which visits hospital sites to make sure the machines continue to function properly.

Here's how they fared during the first quarter. 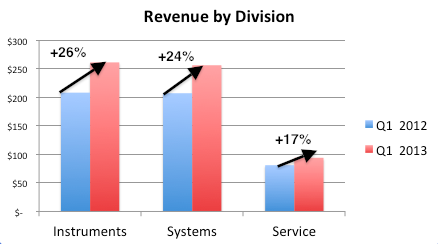 Though the company experienced a 30% growth in earnings, after today's 4% decline, today's P/E of 29 seems about fair. But Intuitive has always tended to trade above its growth rate; and the question for investors is: "Why did that trend stop?"

Causes for concern
There are two primary reasons Intuitive's stock isn't getting as much love as it once had. For starters, guidance was lower than investors were hoping for in the second quarter. It's important to remember, however, that guidance is just that -- an educated guess. And while it serves as a data point, it's a very short-term one at that.

The larger concern is likely the press that's started to question whether the da Vinci is needed for minimally invasive hysterectomies. Some may look to what's happened in prostatectomies in the past as a blue print.

As CEO Dr. Gary Guthart explained in 2012, there was a change in prostate "screening protocols and a change in treatment recommendations for low-risk cancer patients away from definitive treatment." These changes contributed to a 15% decline in prostate procedures in the United States.

If protocols were changed for hysterectomies, it isn't out of the realm of possibility to see a similar decline in hysterectomies.

What I'll be doing
I'm not a doctor, nor would I pretend to know anything about performing hysterectomies, prostatectomies, or any other procedures that Intuitive has made its name in. At the same time, I'm a student of disruptive technologies, and see da Vinci as a prime example of a disruptive technology.

There may be some tough times ahead for the company's stock, but as far as long-term concerns for the company and its procedures go, there was a great point made at the end of the conference call investors should remember. Guthart relayed what a surgeon had told him: "Open surgery hasn't gotten any better for patients, and laparoscopy hasn't gotten any easier for surgeons."

In other words, traditional surgery is probably as good as it'll ever get right now. It might be better than da Vinci right now, or it might not. But the point is, there's still tons of room for improvement. I'm not adding shares right now, but I'm also not selling for this very point.