Netflix investors may be getting a little too excited about the company's prospects, following an earnings beat on Monday.

Most Netflix (NFLX 0.58%) investors will be overjoyed this week after the stock rose as much as 25% on Tuesday morning, following an earnings beat on Monday. However, in the midst of this euphoria, it may be useful to take a step back and consider whether the stock's gains will hold. After all, Netflix stock has crashed more than 50% on two separate occasions in the last two years. 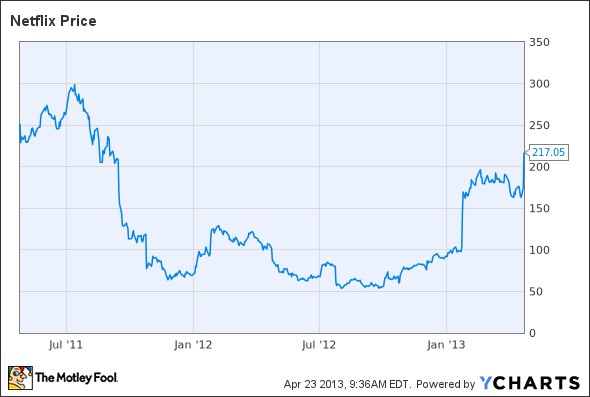 While Netflix has a strong position in the online subscription video market, there are several reasons Netflix's gains may not last. Netflix beat most analysts' estimates with adjusted EPS of $0.31 last quarter, but the company still faces some major challenges (as does the stock).

1. Still burning cash
Netflix may have earned an accounting profit last quarter, but it didn't actually make any money. Free cash flow, which measures the amount of cash left over for investors after paying for operating costs and capital expenditures, was negative for the third consecutive quarter. Moreover, management told investors to expect FCF to continue lagging net income for the foreseeable future as the company invests in new original content.

These investments may be necessary for Netflix, but cash costs cannot sustainably exceed revenue. Additionally, today's cash costs must eventually be reflected in Netflix's accounting statements, implying that the company's costs will rise significantly in the next few years. If Netflix can keep the subscriber base growing quickly, it may be able to overcome these cost increases. On the other hand, if subscriber growth starts to lose momentum in the next few years, the company may never reach the profitability levels investors expect.

2. Content costs going up
Not surprisingly, the entry of Amazon.com (AMZN -0.03%) and Hulu into the online subscription video market is starting to drive up content costs. Amazon has been particularly aggressive in buying content; it has more than doubled the size of its Prime Instant Video content library in the last year. Amazon is also in the market for original content.

In the short term, this competition could boost Netflix's profitability, if the company adds less content because competitors are outbidding it. Netflix specifically stated in its shareholder letter this quarter that it is moving toward "curated" content and will not renew nonexclusive bulk content deals (i.e., Netflix will focus on quality rather than quantity). This could help Netflix to keep cost growth in check as it spends heavily on exclusive content. However, longer-term, the paring down of Netflix's streaming content library could cause some users to try Prime Instant Video, since Amazon seems more interested in maximizing the amount of content available.

3. TV network or media conglomerate?
One of the major reasons for the volatility of Netflix's stock for the past two years is that earnings have been beaten down by start-up costs for international markets, as well as the de-emphasis of the DVD-by-mail business. While Netflix has earned approximately $0.68 per share in the past year, it had earned nearly $4 a share in the 12 months prior to June 30, 2011. Rather than valuing Netflix based on earnings, investors have tried to value Netflix's business by comparison to similar companies.

Netflix CEO Reed Hastings has stated in the past that he wants to become more like popular TV networks such as HBO. This was one of the main justifications for the company's push into first-run TV shows and other exclusive content. However, the market is giving Netflix a valuation significantly above that of many TV networks. Netflix's fully diluted enterprise value of more than $12 billion is roughly double that of AMC Networks (AMCX -0.81%). AMC is a fairly successful cable network, with hit series like Mad Men, Breaking Bad, and The Walking Dead: shows that happen to be cornerstones of the Netflix content library.

Netflix is also worth almost half as much as CBS (PARA 1.38%), which owns the highest-rated TV network as well as half of The CW (another national network), Showtime, and various other media assets. While Netflix is still worth far less than HBO parent Time Warner (TWX), Time Warner owns several highly successful cable networks and a variety of other media businesses. Investors are valuing Netflix like it will eventually become the equivalent of not just a TV network, but a highly successful media conglomerate. While this is not impossible, it seems to be a very bullish "best-case scenario" for the company.

Foolish conclusion
Netflix investors should take a moment to savor this week's gains --  and then think seriously about whether they are likely to hold over the long term. While buy-and-hold is usually the best investing strategy, it's still a good idea to sell stocks that become significantly overvalued. While Netflix beat earnings expectations last quarter, it is still burning cash and content costs are rising, and yet it is valued similarly to the most profitable TV networks. These factors mean that there is a good chance that Netflix's valuation will fall back to earth (again) in the next few years.