Let's see what the numbers say about Advance Auto Parts.

Investors love stocks that consistently beat the Street without getting ahead of their fundamentals and risking a meltdown. The best stocks offer sustainable market-beating gains, with robust and improving financial metrics that support strong price growth. Does Advance Auto Parts (AAP 4.99%) fit the bill? Let's take a look at what its recent results tell us about its potential for future gains.

What we're looking for
The graphs you're about to see tell Advance's story, and we'll be grading the quality of that story in several ways:

What the numbers tell you
Now, let's take a look at Advance's key statistics: 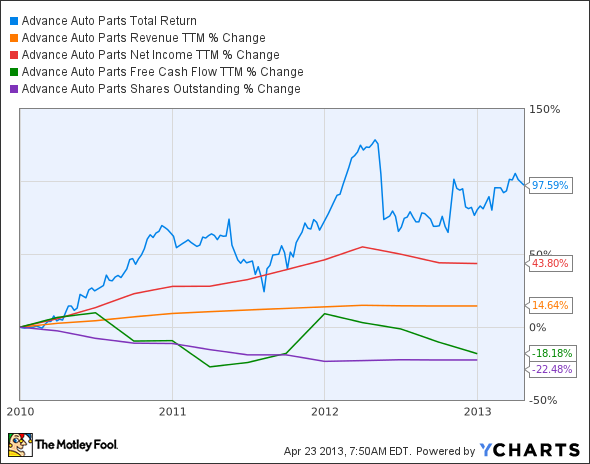 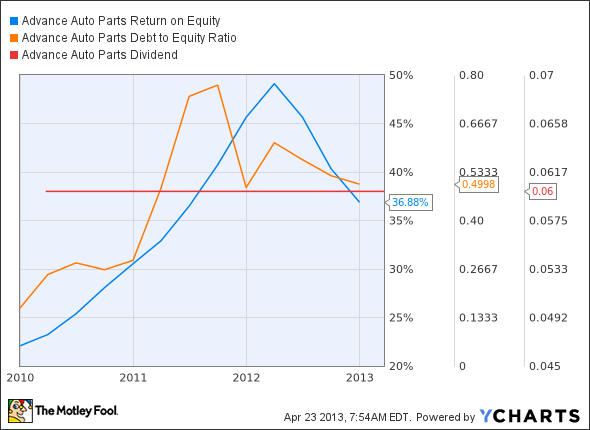 How we got here and where we're going
Advance stumbles a bit with its flat dividend and rising debt levels, but the company otherwise puts up a strong performance by earning six out of nine possible passing grades. Declining free cash flow is a bit concerning, but it's worth noting that despite the slight deterioration, Advance's free cash flow levels have remained higher than its net income for the entire three-year tracking period. If that continues, the company should have no problem picking up a point or two the next time we examine it. But can it? Let's dig a bit deeper.

The basic premise for investing in Advance (or other auto parts suppliers, for that matter) is that American auto buyers are more likely to repair old clunkers when the economy is weak. That proposition has somewhat broken down over the past year, as revenue has remained flat while net income and free cash flow have both fallen -- substantially, in the latter case. You might think that this is a problem, but Advance is actually doing better over the past eight quarters than Big Two automakers Ford (F -1.06%) and General Motors (GM 0.56%), which have (despite a massive one-time spike in Ford's case) had more difficulty maintaining profit growth than their smaller and more specialized cousin: 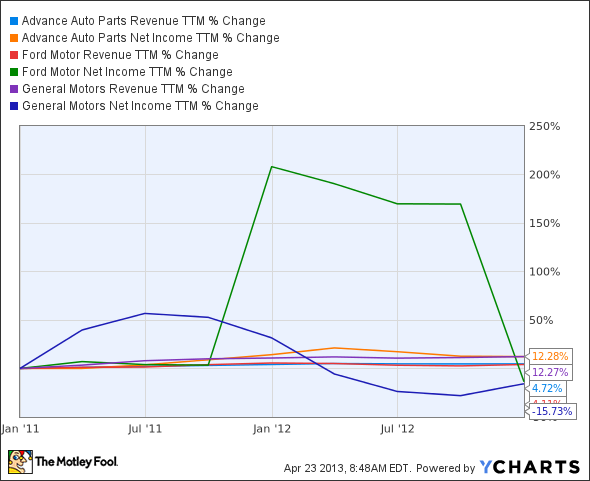 I pointed out my reservations over the expectation for continued economic growth earlier this month in my roundtable debate on Ford with fellow Fools Travis Hoium and Sean Williams. Although I was overruled there, I still maintain that this year is likely to see more belt-tightening than in the recent past. That may not necessarily benefit Advance more than its peers. Sean (who seems to be on top of everything) notes that Genuine Auto Parts has bucked the decline Advance experienced last year, with 4% same-store sales growth at the end of 2012. On the other hand, Advance offers something with greater potential to drive a near-term pop: It might be on the block this year. Investors shouldn't bank on a buyout, but when a company's executives start talking about selling the company, it's usually expected that the sale price will come at a premium.

If that potential buyout falls through, Foolish blogger Ted Cooper points out that Advance has room to improve its industry-lagging operating margin, which at present is half that of leader AutoZone. Advance's diversity (it serves both the do-it-yourselfer and the commercial market) places it at a bit of a disadvantage against the specialist AutoZone, which caters almost exclusively to the do-it-yourself market. Another issue is higher overhead, which could be pared back this year. If Advance's management can trim the fat, its sector-lagging valuation could present an attractive buying opportunity.

Putting the pieces together
Today, Advance has some of the qualities that make up a great stock, but no stock is truly perfect. Digging deeper can help you uncover the answers you need to make a great buy -- or to stay away from a stock that's going nowhere.