Different perspectives can help you become a better investor.

In that spirit, we three Fools have banded together to find the market's best and worst stocks, which we'll rate on The Motley Fool's CAPS system as outperformers or underperformers. We'll be accountable for every pick based on the sum of our knowledge and the balance of our decisions. Today, we'll be discussing Ford (F 3.89%).

Ford by the numbers
Here's a quick snapshot of the company's most important numbers:

Travis' take
The auto industry has historically been terrible to investors. Every time the economy turns south or gas prices rise, consumers change their spending habits and auto manufacturers are too slow to react. This is in part because manufacturing lines weren't built to be adaptive to quick changes and labor union contracts constricted management's ability to navigate through challenges.

Some of these structural challenges still exist, but since Alan Mulally took over at Ford, he's been able to navigate them better than almost any other executive in the industry. He renegotiated union contracts, pushed retirement health care off the balance sheet, and brought innovation and style back to Ford's cars.

His success led to a nice $5.7 billion for the company last year, leaving the stock with a 9.0 P/E ratio. I think there's significant upside for investors, given that value and the trends for Ford. The North American market has stabilized, and Ford is expecting growth this year, which should drive results higher. Revenue was up 47% in the Asia-Pacific region last year, and management is expecting more growth this year, adding to a small profit it made in the region. Europe will continue to be a drag, but if the continent ever returns to normal, it's pure upside for Ford.

Add all of this together, and I'll give Ford an outperform call, mainly because of the stock's value and the vision of Alan Mulally.

Alex's take
I've watched many of my fellow Fools get onto the Ford bandwagon in the past six months, telling me (and everyone else reading this site, of course) that the company is cheap, well managed, and full of good new technology and clever styling that will appeal to the younger generation of car buyers. You can see many of these arguments from Sean and Travis, so I won't rehash them again.

However, all of this feels to me like bandwagon jumping at precisely the wrong time. Here's how Ford performed coming out of the recession, compared with a dividend-adjusted index return: 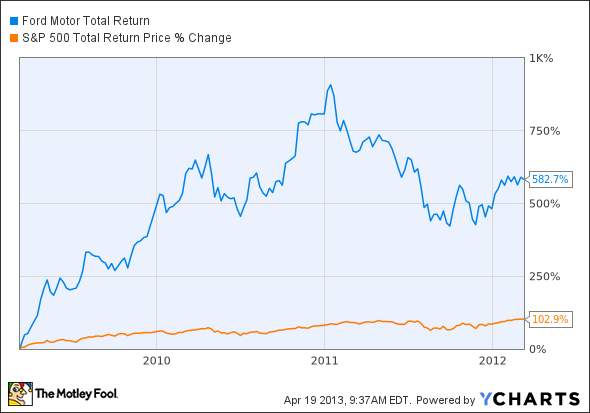 And this is how it's performed over the past year: 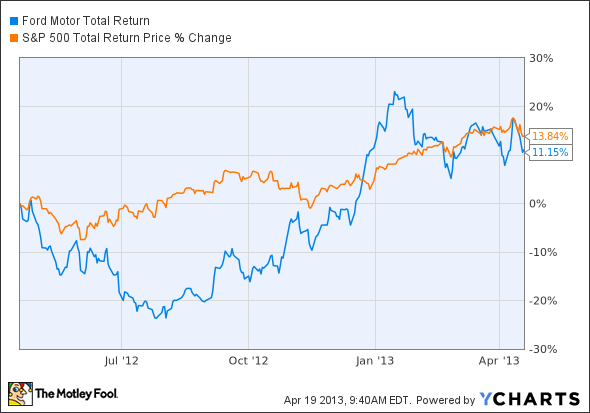 Will Ford return to its index-trouncing ways for the rest of the year? I don't really think so. As Travis already mentioned, automakers tend to be very reliant on economic tailwinds, and I pointed out earlier this week how closely Ford's earnings match the rise and fall of the global economy. Ford may say it expects growth this year, but an economic downturn can catch many people by surprise -- just ask GM, which fell into bankruptcy several years ago, when the subprime bubble blew up in everyone's faces. Or ask Ford, which was in pretty dire straits itself at the time.

I'm not saying that we'll see anything that devastating in the near future, but economies rise and fall on relatively predictable timelines, and we're now more than four years into one of the longer uninterrupted expansions in recent memory. No matter how good Ford's become, it can't singlehandedly reverse the basic human tendency to tighten the belt when the economy slows down.

I've outlined various reasons I expect a slowdown in auto sales in another article, which you can read by clicking here. I'll be the lone voice of dissent here and recommend avoiding Ford for the time being. However, that doesn't mean I'm not eyeing it for future investment, should the predicted slowdown kick in and make the stock even more attractive.

Sean's take
It's taken me quite some time to come around to Ford after its near-bankruptcy during the recession, but its focus on four key areas has renewed my faith in the company.

First, Ford is working vigilantly to provide the combination of better fuel efficiency as well as horsepower. We've seen exactly this with the introduction of its EcoBoost engines in 2009, which use turbochargers for extra horsepower when needed but use less fuel. Sales of EcoBoost engines should double this year alone from the combined production over the previous three years.

Secondly, Ford is mopping the floor with the competition in fast-growing emerging markets such as China. In March, Ford saw its unit sales jump 65% in China, compared with just 11% for GM and negative returns for both Honda Motor and Toyota. Ford is using the ongoing strife between China and Japan's carmakers to turn the tide and pull a similar number to what they did to the U.S. market in the 1980s and 1990s.

Third, Ford is leading the charge when it comes to the revival of the muscle car. Unlike many of the other reintroduced models, the Mustang has been in production for nearly 50 years now. You simply won't find a car with bigger horsepower potential for a lower MSRP price point than the Mustang, and it's exciting car buyers to get behind the wheel once again.

Finally, Ford is relying on its dependable F-Series of trucks to drive over the competition. With GM failing to significantly remodel the Silverado and Sierra for a span of approximately six years, the F-Series has maintained steady market share as one of America's top-selling vehicles.

None of this would be possible without the top-notch leadership and innovation of CEO Alan Mulally, who has completely revamped Ford's lineup around the globe. If you'd like to read my more thorough analysis of Ford, click here, but my overall opinion is that it's time to hit the gas pedal!

The final call
It's not without hesitation that we give an outperform call on Ford. We'll watch economic trends and Ford's results closely to see if there are fundamental changes in our thesis and close out the call if we think it's necessary. For more of our market-beating picks, check out our TMFYoungGuns CAPS page. Our 25 picks have outperformed the market by 356 points so far and we're adding more picks every week.