Automakers can't escape the impact of economic cycles on their bottom lines.

Asking whether Ford (F 3.43%) or General Motors (GM 2.61%) are good investments is very much like asking whether the global economy is growing or shrinking. We can talk about what type of auto models they've released, how well they're performing in China, the size of their unfunded pension liabilities, the number of plants open, and so on, until we're blue in the face. Ultimately, the only thing that matters to automakers is whether people have money that they want to spend on cars.

It's very easy to see the relationship on a chart of Ford's stock price and its earnings per share since the beginning of the dot-com growth period of the 1990s: 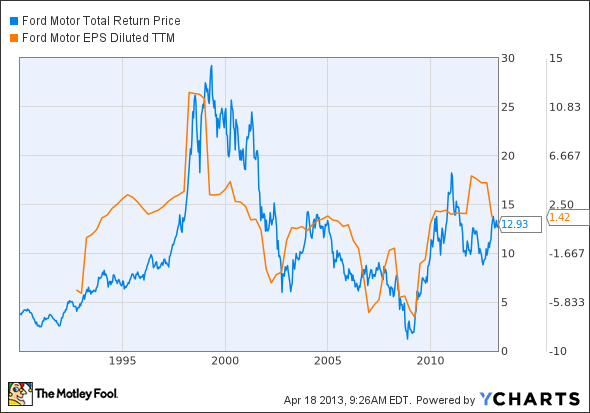 Everyone wins during the dot-com bubble, including the automakers that happened to be perfectly positioned at the crossroads of the greatest wealth expansion in global history, and the widespread popularity of big, bulky, and very profitable vehicle platforms. Then, money gets a bit tighter. Luckily, all those refinanced mortgages during the subprime bubble gave a lot of car buyers their driving-around money. Where are we now? Well, from the looks of it, we're near the top of another auto-buying slowdown, the result of another economic slowdown.

Don't get me wrong. I like Ford. I'm even starting to come around to the notion that GM is a much better automaker now than it was before it had to go crawling to the government with its hat in its hand for a few billion dollars. Both companies have learned efficiency and design tricks that have put them on sounder footing than they were before the financial crisis; but will that be enough to power through a global economy that's both highly connected and increasingly fractured? I don't think the evidence is strong enough to go after cyclical stocks as the cycle turns away from growth. Of course, I might be wrong -- but most of the evidence doesn't seem to point toward a booming global economy this year.