Office supplier's largest shareholder tries to get board off the dime to make changes.

Change at Office Depot (ODP -2.01%) can't come fast enough for activist investor Starboard Value, which owns almost 15% of the office-supplies business and is its largest shareholder. Even as Office Depot seeks to take over ailing rival OfficeMax (NYSE: OMX), the investment firm is agitating for the ouster of the board of directors.

In a filing with the SEC, Starboard announced that it was taking its move to replace the board of directors directly to the company's shareholders. It's not that it doesn't favor the OfficeMax acquisition -- in fact it does -- it's just that it feels that most of the board of is too inexperienced to run a retail operation, and that the board's decision to entrust the CEO spot to someone with zero experience highlights the shortcomings of the company's executive leadership.

Office Depot is delaying holding its annual meeting and citing the merger as the reason, but Starboard notes that OfficeMax is going ahead on its own and thinks the board is trying to keep shareholders from voting for members. As a result, Starboard is commencing a consent solicitation, which allows stockholders to take action in the absence of a stockholder meeting.

No substitute for experience
On the surface, it's hard to argue with Starboard's reasoning. Other than Kathleen Mason, president and CEO of Tuesday Morning, and Dunkin' Brands CEO Nigel Travis, the board is bereft of anyone with a retail background. A case could perhaps be made for Brenda Gaines, the former president and CEO of Diners Club North America, a division of Citigroup (NYSE: C), but she retired from there more than eight years ago, and it could be why, out of Office Depot's 10 directors, Starboard is seeking to replace eight of them.

And though its slate of nominees seems fairly solid, I've got reservations about one of them, namely Bob Nardelli, the former Home Depot (HD -0.20%) head who left the big-box retailer in a bit of a shambles. While he came to the position with respectable bona fides, having served at General Electric and Chrysler, his tenure at the DIY center was anything but smooth, and even his departure left a bitter taste in the mouths of lots of investors.

Naturally, although Jeffrey Smith, co-founder and CEO of Starboard, wants himself on the board, the rest of his picks to join him come with significant retail backgrounds, including the CEO of privately held Orchard Brands, a specialty clothing retailer; the president and CEO of Republic Airways' Frontier Airlines subsidiary; and a financial and technical specialist who's worked at Allied Domecq and Kraft and currently serves on the board of Tractor Supply.

Know thy enemy
Perhaps key is Joseph Vassalluzzo, who until a few years ago was vice chairman of Staples (SPLS), the largest office-supply company, where he was in charge of all their M&A activity. As Office Depot seeks to absorb its rival, having someone on board with insights into how the biggest player in the space operates ought to be a welcome addition to the board.

No doubt Starboard has been strident in its criticism, but review the performance of Office Depot next to its rivals, and even OfficeMax looks like a standout. 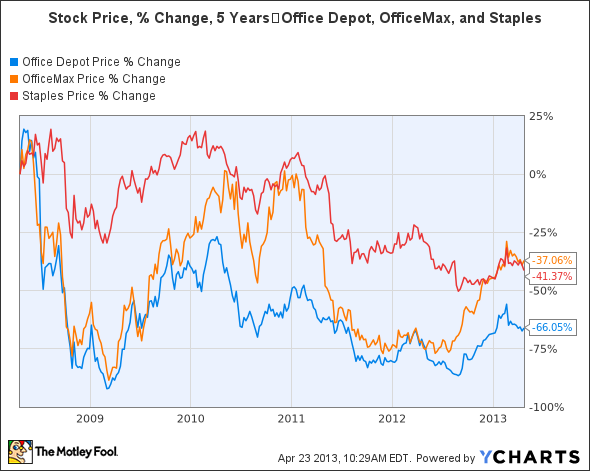 The recession and subsequent jobless "recovery" have weighed heavily on all three players, and the industry would have been better office had Staples been allowed to acquire Office Depot years ago. Yet the merger signals an opportunity to learn from past mistakes, and I'd have to agree that the time for change has come and the rationale behind Starboard's efforts to replace the board rings true.

For the retail investor

The retail space is in the midst of the biggest paradigm shift since mail order took off at the turn of last century. Only the most forward-looking and capable companies will survive, and they'll handsomely reward investors who understand the landscape. You can read about the 3 Companies Ready to Rule Retail in The Motley Fool's special report. Uncovering these top picks is free today; just click here to read more.