With domestic iPhone data in hand, investors can now parse through the figures to get a picture of how the iPhone is faring in the U.S. -- and what that means for Apple's business.

Apple (AAPL 4.01%) just posted its earnings figures last night, almost at the exact same time that domestic main flame AT&T (T 1.67%) put up its own digits. Last week, Verizon (VZ 0.28%) shared its iPhone figures, and this morning Sprint Nextel (S) told investors how many iPhones it activated during the quarter.

With all the domestic data in hand, let's dig in.

Technically, Leap Wireless (NASDAQ: LEAP) is another iPhone carrier in the U.S. with its Cricket brand, but its iPhone sales haven't been meaningful enough for the carrier to disclose specific figures. What investors do know is that the prepaid carrier is well behind schedule on meeting its purchase commitment, so it's safe to say Cricket iPhones aren't moving the needle meaningfully one way or another. T-Mobile is now an iPhone carrier, but that launched after the quarter closed.

Between the top three carriers, there were 10.3 million iPhones activated, or 28% of Apple's total. That composition is down sequentially from 36% last quarter, and in line with historical precedent following launch quarters. Each carrier saw a modest downtick in its contribution to total iPhone units. 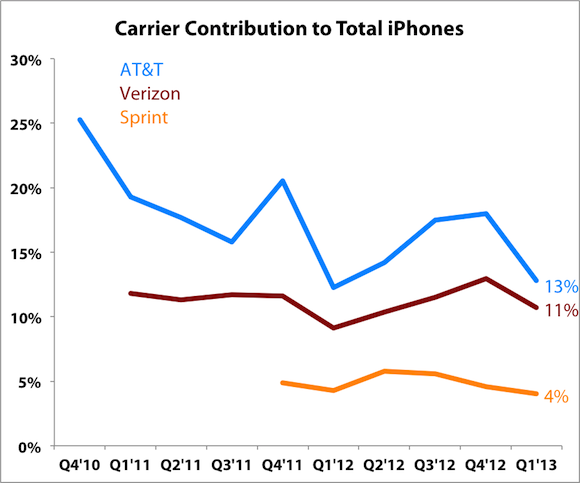 The iPhone's composition of total smartphone sales also remained on par with historical levels for each carrier.

Keep in mind that Sprint is also on the hook for a $15.5 billion iPhone purchase commitment over four years. Using quarter-specific iPhone average selling prices and Sprint's reported activations implies that the No. 3 carrier has likely fulfilled approximately $6.3 billion of its obligation over the past six quarters. That means Sprint may be 41% through its $15.5 billion commitment through 38% of the time frame -- slightly ahead of schedule. Too bad Leap can't say the same thing.