How much profit is too much?

File this one under "You can't please all of the people all of the time." After years of catching flak from Wall Street for spending too much on content, Netflix (NFLX 1.90%) is now facing questions about spending too little.

In fact, the question that opened this week's earnings release call was from an analyst who asked, "How do you think about the risk of allowing domestic margins to rise too quickly, for example [in] attracting more competition or underinvesting in future growth?"

That's right, there's at least one Wall Street firm out there that's worried about a company's profits rising too quickly.

But the question actually raises a good point. Netflix's streaming margins in the U.S. have grown much faster than even the company expected. 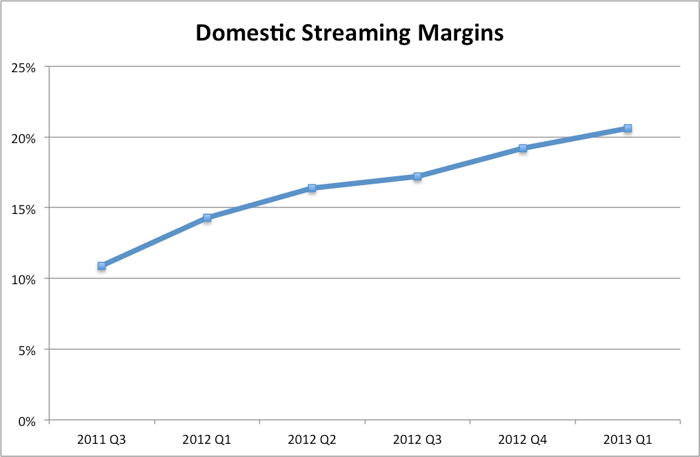 That's one big benefit of having your subscriber base grow faster than your expenses do. Still, that pace of profit expansion is twice the 1%-per-quarter growth that management has targeted.

And it's true that those kinds of profits will attract plenty of competition. Coinstar (OUTR) and Verizon's (VZ -0.49%) new Redbox Instant service pairs DVD rentals with online video, and it just started taking paying subscribers. Verizon sees the project as having the potential to boost profits starting next year.

Other streaming rivals like Amazon.com (AMZN 4.03%) and Hulu have been bidding so aggressively for content that they've driven up prices for streaming titles, according to Netflix CEO Reed Hastings. Amazon isn't planning on slowing down on that pace, either. CEO Jeff Bezos just told shareholders that the company's "heavy investments" in digital media are a key part of its long-term strategy to improve the customer experience.

As for the risk to future growth, that's also worth worrying about. After all, the big reason that Netflix's membership additions have been so strong is that the company has spent billions to beef up its library. Netflix doesn't want to kill that virtuous cycle by passing on popular but expensive content just to boost short-term profits.

But I don't see Netflix falling into that trap. Instead, it just looks like the company's push into original content like House of Cards has made the service more engaging for existing members, and an easier sell to new ones.

Netflix hasn't slowed the pace of fresh content deals, having recently spent hundreds of millions on titles from Disney, Hasbro, and DreamWorks. And there are plenty more exclusive, original series in the works for this year and next. As long as those major deals keep coming, there's no reason both subscribers and shareholders can't be happy with Netflix's content investments.