Last quarter, this Fool had thought Lumber Liquidators' valuation was looking a little rich. Boy, was he wrong.

Back in February, I wondered what happened to shares of Lumber Liquidators (LL -3.38%) after the company posted strong fourth-quarter and full-year 2012 earnings.

After all, shares of the hardwood flooring specialist fell 7% the following day, even after the company grew revenue 21%, posted 11.4% same-store sales, and increased fourth-quarter net income by a whopping 63% year-over-year.

As a result, I concluded the valuation was a tad rich for anyone hoping to open a new position, especially considering the stock had more than tripled over the prior year and traded hands around 35 times trailing earnings at the time, or significantly above its average trailing price-to-earnings ratio since going public in 2008.

A big slice of humble pie
Naturally, take a look at how shares of Lumber Liquidators have performed relative to the S&P 500 since then: 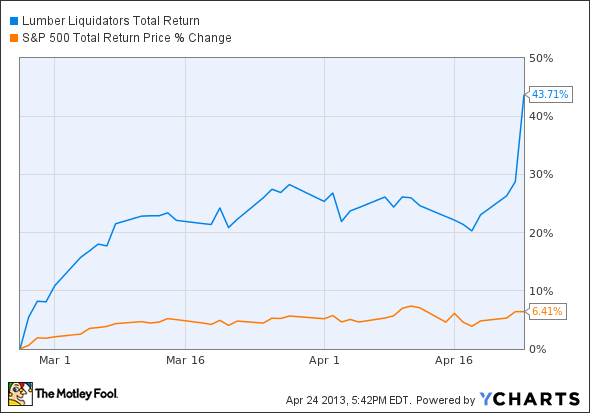 To my credit, I did suggest current shareholders should remember there's "much to be said for letting your winners run," and also noted Lumber Liquidators "has plenty of room for sustainable growth" over at least the next five years. What's more, the S&P 500's 6.4% return over the past two months certainly wasn't bad.

But seriously, Lumber Liquidators? Did you really need to jump another 44%?

The numbers
I suppose it did. In fact, the last 12% jump came on Wednesday alone after the company absolutely destroyed analysts' first-quarter earnings estimates. When all was said and done, first-quarter revenue grew 22.5% to $230.4 million, helped by impressive 15.2% comparable-store sales growth.

Better yet, net income rose an incredible 92.5% from the year-ago period to $0.57 per diluted share, topping expectations that called for earnings of just $0.42 per share on $215.5 million in revenue.

Better better yet, Lumber Liquidators management also increased guidance for the remainder of the year and now expects net sales in the range of $913 million to $942 million, up from the previous guidance of $885 million to $920 million. Earnings per diluted share should also be higher at somewhere between $2.10 and $2.35, or up from the previous range of $1.90 to $2.15.

Foolish final thoughts
In an ironic twist, just last week my wife and I were having trouble deciding on a new hardwood floor. Long story short, we were utterly disappointed with the mediocre hardwood selections and less-than-knowledgeable customer service offered by both our local Home Depot and Lowe's stores. Even worse, I questioned the sanity of the other specialized flooring businesses in my city, given the sky-high prices they were demanding for their wares.

Of course, while I don't expect the more diversified behemoths in Home Depot or Lowe's to go anywhere anytime soon -- especially considering the ongoing rebound in the housing market -- I still found myself lamenting the fact that our nearest Lumber Liquidators stands more than three hours away.

In the end, Lumber Liquidators' price advantage and simple, superior business model are the very reasons its shares should continue outperforming the broader market for the foreseeable future.

As for my botched "underperform" CAPScall, Lumber Liquidators did me a favor by reminding me of something Warren Buffett wrote in a 2008 editorial for The New York Times: "So if you wait for the robins, spring will be over."