Russian search engine show impressive growth, but is it a buy?

If you're trying to figure out how to best capitalize on the growing potential of Internet search companies -- and their ability to deliver more and more personalized advertisements to users -- you could be forgiven for spending most of your time digging into Google (GOOGL 1.40%) and Chinese giant Baidu (BIDU 3.68%).

But by only focusing on those two, you could be missing out on a Russian company that's quietly carving out its niche in Russia and former bloc states: Yandex (YNDX -6.79%).

Let's look at the numbers
Over the past two-plus years, Yandex has shown impressive growth in both the amount of money it takes in, and the profit that it generates. 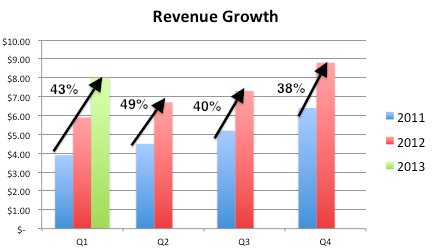 Source: E*Trade, SEC filings. All numbers in millions of rubles 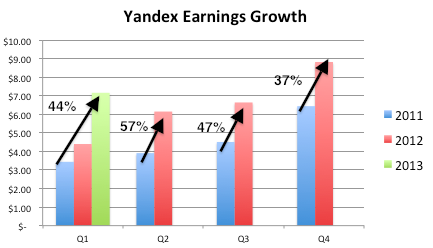 There's some real strength here
While Yandex might be the domestic choice of search for Russian-speaking citizens across the world, that doesn't mean it still doesn't have to compete with the likes of Google and even Baidu. That's why investors have to be encouraged by the fact that the company went from a 59.4% market share in search last year to a 61.6% this year.

On top of that, the total number of companies wanting Yandex to host their advertisements increased 26% since early 2012, with 226,000 total customers.

It's all about the clicks
One of the key criticisms of Google a few years back was that, while it was increasing the total number of clicks on its advertisements, it was getting paid far less for each click. Those concerns have been quieted recently, as Google's cost per click is rising again.

So far, Yandex has not had to make that trade-off. Compared to the first quarter of last year, Yandex recorded 18% more clicks, and the cost for each one of those clicks increased 14%. Taken together, that's a 35% increase in revenue from clicks. Google, on the other hand, only increased its revenue from clicks by 22%.

So does that make it a better buy?
Its important to realize that the search game is an evolving one, and Google is simply further along in its evolution than Yandex (or Baidu) is. Google has already started dealing with its mobile strategy -- which generates less revenue -- and has gone through the process of sacrificing cost-per-click for heavier volume. Investors paid a price for this shift in the short term, but have come out winners lately.

Right now, Baidu is in the process of trying to figure out its mobile strategy. That, combined with the fact that some are fearful of a slowing Chinese economy, has the stock trading at a significant discount. And Yandex is just now maturing to the point where mobile will start to be the looming question for investors.

When you compare the metrics, however, its tough to argue against Yandex as a pretty solid investment.

How I read this information
Even though all three of these companies are the dominant search engines in their respective parts of the world, they are all at different points in their evolution. I wrote this piece because I think Yandex doesn't receive nearly enough attention for the opportunity that it presents.

At the same time, I think Google and Baidu are much more solid bets today, based both on their operating history, and the price that they are respectively selling for. That's why these two make up 17% of my real-life holdings.