Has anyone noticed a common theme among the first-quarter results for many of the big medical-device companies? In case you missed earnings announcements from Abbott Labs (NYSE:ABT), Boston Scientific (NYSE:BSX), Edwards Lifesciences (NYSE:EW), Johnson & Johnson (NYSE:JNJ), or Stryker, the following chart shows how their medical-device business fared during the quarter. 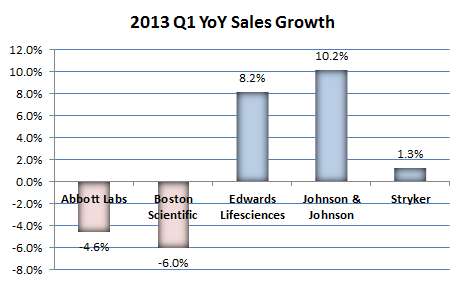 Oh, wait -- you don't see a trend here? Actually, there is one. We just have to dig a little deeper to uncover it.

These sales included the impact of J&J's acquisition of Synthes. That impact: 14% worldwide sales growth. In other words, J&J's medical-device sales actually shrank in the first quarter excluding this acquisition.

Edwards Lifesciences and Stryker both reported positive year-over-year sales growth for the first quarter, although Stryker's numbers look relatively weak. Still, up is better than down. But notice how this growth compares with the two companies' numbers over the past five years. 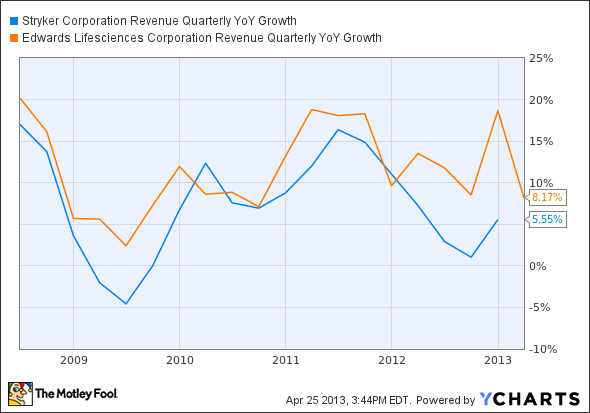 Unfortunately, the chart doesn't reflect Stryker's just-reported first-quarter year-over-year growth of 1.3%. However, if you mentally plug that recent figure into the picture, you'll see something in common between the two companies. While they both grew sales, those growth rates caused the first quarter to be one of the two worst quarters since 2009 when the economy began emerging from the huge financial crisis from the previous year.

What these figures don't show is that both companies missed analyst revenue expectations. Stryker fell short, although barely, with $2.19 billion in revenue versus the consensus analyst estimate of $2.2 billion.

Edwards, though, missed by a wider margin. The company reported first-quarter revenue of $497 million. Analysts expected nearly $519 million.Even worse for Edwards, the company cut its full-year sales forecasts. Shared plunged 22% on the news.

A culprit in common?
These large medical-device makers all experienced either sales declines or weak sales growth relative to the past. Could the common culprit be Obamacare?

It's certainly no secret that several medical-device industry leaders predicted that Obamacare would hurt the industry. Stryker was one company that attributed large layoffs in part to the impact of the 2.3% excise tax the legislation imposed.

There's an old adage that says, "Tax what you want less of." Some would argue that there's no coincidence between the first quarter of the Obamacare medical-device excise tax and the weak sales numbers that these large companies experienced.

The problem at this point, though, is there isn't any conclusive evidence that Obamacare caused this first-quarter sluggishness. One factor to consider is that there were fewer sales days in the first quarter of 2013 than there were in the same quarter of 2012. Each company also supplied varying reasons for sales weakness.

For example, some of Abbott's sales decline stemmed from its agreement to supply Promus stents to Boston Scientific in mid-2012.Edwards Lifesciences CEO Michael Mussallem said that lower-than-expected transcatheter heart valve sales were "primarily the result of evolving economics for some hospitals and still developing capacity of both hospitals and their heart teams."

At least one medical-device maker actually had a good first quarter. Robotic surgical systems maker Intuitive Surgical (NASDAQ:ISRG) grew its revenue by more than 23% year over year. First-quarter revenue of $611 million beat what analysts were expecting by $30 million. And Intuitive was shackled with the same medical-device tax that all the other aforementioned companies bore.

Don't make too much out of Intuitive Surgical's exception, though. While the company is a medical-device maker, grouping its products with more traditional medical devices is like comparing apples to oranges.

Blame game?
So, is Obamacare to blame for the poor results for several medical-device companies in the first quarter? I think the answer is that it's too soon to know for sure.

My view is that the legislation's excise tax is taking some economic toll. How big that impact is, though, is difficult to ascertain. I would also posit that multiple factors are at work in the first-quarter results, as evidenced by the reasons cited by the different companies. Obamacare might be a cause for industry weakness, but it's not the only cause.

Do you think Obamacare could be a major culprit for sluggish medical-device sales? Share your opinion in the comments section below.